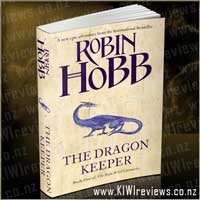 Disclosure StatementFULL DISCLOSURE: A number of units of this product have, at some time, been supplied to KIWIreviews by HarperCollins or their agents for the purposes of unbiased, independent reviews. No fee was accepted by KIWIreviews or the reviewers themselves - these are genuine, unpaid consumer reviews.
Available:
July 2009

Guided by the dragon Tintaglia, they came from the sea: a Tangle of serpents fighting their way up the Rain Wild River, the first to make the perilous journey in generations.

For Thymara, a Rainwilder born with scales and claws, the return of dragons symbolises the return of hope to her war-torn world. Leftrin, captain of the liveship Tarman, also has an interest in the hatching; as does Bingtown newlywed, Alise Finbok, who has made it her life's work to study dragons.

But the creatures which emerge from the cocoons are a travesty of the dragons of old. Stunted and deformed, they cannot fly; some appear witless and bestial. Soon, they become a danger to all: it is decided that they must be moved. Far upriver, so far it is shown on no map, lies the legendary Elderling city of Kelsingra. Perhaps there the dragons will find their true home.

However, if the dragons are to get there, a band of dragon keepers must be recruited to attend them. None are expected to return, or even survive, but Thymara is certain it is her destiny.

I am a big fan of Robin Hobb, but this book I just couldn't get into.
The plot seemed to drag and the storyline jumped around a bit to much for me.
Now don't get me wrong, Hobb is an exceptional writer and is using this book to build the story for the rest of the series, the descriptions of the characters, the rain wilds, the dragons and the serpents really brings them to life. It just seems all those descriptions make the book too hard to read and immerse yourself in.
Hopefully the next book will be a better read.

Dragons, ships that think and speak, people with claws and scales... yup, just my kind of fantasy alright!

For a long time now, I have been wanting to try one of Robin Hobb's novels, but there have always been other books to read. Finally, the time was right and I was able to gleefully dive into "The Dragon Keeper" to see if Hobb really is the great author I keep hearing she is. Several chapters later, I finally surfaced and decided that yes, Hobb definitely is one of the masters of fantasy! The Dragon Keeper builds up slowly at first... maybe a tiny bit TOO slowly, but at least you get to know the main players in this story through and through from the start... but about halfway through the book, the pace starts to quicken quite nicely. By the end of the last chapter, I found myself chomping at the bit to find out just what happened next!
This is definitely one of those series where the first book is far more about introducing "the cast" than the REAL story, but there is definitely enough of a strong storyline showing through to enthuse readers to want to continue on to the next book, "Dragon Haven"... which is good, considering just how thick this book is.

In this book, the characters are well thought out, with each of the main characters having a strong, detailed background that made it easy to feel as though you had gotten to know them.. yet with just enough left out to keep you wondering just what surprises would be revealed later on. The dragons too, were rather interesting, with a rather different spin on how they came to be dragons. I'm used to dragons being born AS dragons, straight from the egg, but Hobb's version has them as serpents that, like caterpillars into butterflies, metamorph into dragons with all the memories of their past serpent and dragon lives. Liveships absolutely fascinate me now, despite what it is they're made of, and I know I will definitely have to go and give the "Liveship Traders" trilogy a try to learn more about them, (especially about Paragon!).

Hobb is very much a talented author and seems to know how to get JUST the right mix of detail and action to help the reader get a good handle on the characters and environment, without losing them in overly lengthly descriptions.. a rare skill I've found, when it comes to fantasy/sci-fi authors!

If you're a Robin Hobb fan (I certainly am now!) or enjoy a good heavy read, or just enjoy fantasy, "The Dragon Keeper" is well worth giving a try!

He had short fat legs, a long thin beak, hairy brown feathers, and tiny little stubs where his wings should be. The pukeko parents looked at each other and shook their heads. What an odd-looking chick!