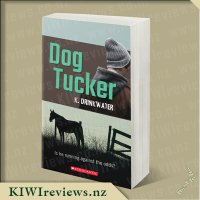 Devlin's story is one that many younger teenagers will relate to, although I was taken aback when Miss Nine saw me reading it and said she would like to read it too. I thought she was rather young to handle a book like this, but she is a bookworm now just like her older brother and is already reading material above that intended for her age range - so I agreed that she could take it.

My own impressions were that this was a story that is as educational as it is entertaining. Many young people are aware of social issues like Devlin's because they have friends who have been in his position, or, even worse, they have been in that position themselves. But there are also many youngsters who have no idea what life can be like for others less fortunate - they are lucky enough to enjoy the comfort and security of a stable home life. While nobody would wish anything less for this second group, it is important that they are made aware of what goes on behind the scenes so they can develop a social conscience as they get older.

Along with the narrative of Devlin's life journey is the parallel theme of animal welfare and the right to life. Zak's story is just as important as Devlin's; although one is a horse and the other a boy, an unlikely bond grows between the two as they learn to trust - first each other, and then others around them. From being two creatures destined to become casualties, the pair grow in confidence until they can take their rightful places in the world. This development is beautifully portrayed by the author; there is no preaching or attempts to persuade the reader to empathise. Rather, this is a good yarn which happens to include some important life lessons. This is the most accessible way for readers to get the message!

When Miss Nine started reading, I thought she would give up after a few pages. But the opening section, with its all too familiar description of a "naughty" child losing it in the classroom and then getting into trouble, hooked her right in. She liked the way the story started with some fast action: this is a technique which is perfect for attracting reluctant readers. Since she is anything but, it proved to be an incentive to keep reading. As an animal lover, she was keen to get to Zac's story as well; the cover pictures of the horse in the paddock and the harness racing had been the images that had attracted her to the book initially.

Once she had reached the section where Devlin moves on to the farm, she was well and truly into the story. I had difficulty getting the book back from her so I could read to the end myself; we spent a couple of days passing the book back and forth until I had finished it. As I write this review, she is halfway through and is really enjoying it. Clearly, a nine-year-old can read at this level if the content is sufficiently interesting and the pace of the story is maintained. I can safely say that we both give this book the thumbs up!

I thoroughly enjoyed this book. I help with foster care day to day and it really gave an insight into how some of these kids could be feeling.

Devlin, underneath it all, is a really sweet boy just keeping his shields up so as not to get hurt, and in the end learns to trust his foster dad.

Once Devlin found something to take his mind off himself and his hurts and pride, he really began to grow up and take responsibility.

I wouldn't read this book without a box of tissues - it is both happy and devastating, such a range of emotions.

I will be reading this book again in the future.

This is an amazing read! It is based on a 13yr old boy, Devlin, whom his mother is blaming for all the wrong doings that have been happening. This in fact is not Devlin's fault, but the fault of his mother's abusive boyfriend. Not long after, the boyfriend succeeds at destroying the family, and Devlin, the eldest of 5 siblings, is sent off into foster care.

Devlin is one angry young man. He is rebellious, and has no tolerance for authority figures. Because of this he is moved from school to school, foster home to foster home.

This story is full of courage, heart-break, fear, joy, love, sadness and laughter. I absolutely loved this book as it is an insight into something I have never seen/heard about before. I think this book would be a terrific idea for young adults to read as it may just change how they are feeling with their current life surroundings.

In short without giving it all away, Devlin has a few hiccups along his journey, however he soon finds something to channel his positive energy in to. This is what changes Devlin into a new young man.

Just remember something great can come from the saddest events!