« An Event in Autumn review

ProdID: 5732 - Colorless Tsukuru Tazaki and His Years of Pilgrimage
Written by Haruki Murakami 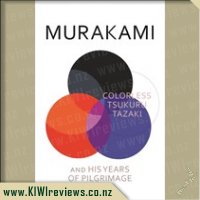 Colorless Tsukuru Tazaki and His Years of Pilgrimage product reviews

Tsukuru Tazaki had four best friends at school. By chance all of their names contained a colour. The two boys were called Akamatsu, meaning 'red pine', and Oumi, 'blue sea', while the girls' names were Shirane, 'white root', and Kurono, 'black field'. Tazaki was the only last name with no colour in it.

One day Tsukuru Tazaki's friends announced that they didn't want to see him, or talk to him, ever again.

Since that day Tsukuru has been floating through life, unable to form intimate connections with anyone. But then he meets Sara, who tells him that the time has come to find out what happened all those years ago.

The Curious Incident of the Dog in the Night-time
Rating: 8.8

Often translated works don't quite capture the true intent of prose as well when translated into English. The translation of Haruki Murakami's latest work from Japanese into English by Philip Gabriel has however hopefully done the story of Colorless Tsukuru Tazaki justice. The translation reads very well and the book as a whole is just beautiful. The cover (mine is in hardback) is a work of art and I keep taking off the dust jacket to look at it. Random House Books NZ have a video on their Facebook page showing the making of the cover if that is of interest to you.

This was yet another of those novels that I have read lately that have kept me awake several nights running as I enjoyed reading it so much. I liked the technique of slowly easing into the story and the suspense as to why Tazaki had been cast aside from his friends. It was an insightful glimpse at what life must be like for some Japanese and I found the story interesting from that perspective also. Told in the third person there is a lot of dialogue in this novel. Using this technique is perfect for getting a sense of Tazaki but also for getting a feel of the sense of removal he has from his own life.

I was however a bit disappointed in the ending. I like stories to be finished off neatly so all loose threads have been tied and plot lines are resolved. I found myself with this novel wondering if there will be another as it ended without the full closure of several threads. This was a book that I thought (though others may disagree and think the ending was perfect for the intent of the story) would have been better finished with an extra chapter or two. I haven't read any other of Haruki Murakami's works so can't compare this with them but I can definitely recommend this as a truly well written and absorbing story written by an obviously very talented author.