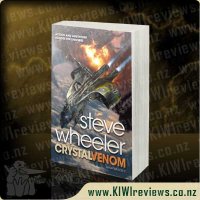 Disclosure StatementFULL DISCLOSURE: A number of units of this product have, at some time, been supplied to KIWIreviews by HarperCollins or their agents for the purposes of unbiased, independent reviews. No fee was accepted by KIWIreviews or the reviewers themselves - these are genuine, unpaid consumer reviews.
Available:
September 2013

The much-anticipated and compelling sequel to Wheeler's first novel - Burnt Ice - Crystal Venom is a more polished piece packed with intrigue, action, betrayal, action, bioweapons, smart munitions, bioengineering, action, heroism and action. Yup... lots of action. Fighting action, political action, subtext action... if you like a book that feels like a rollercoaster that lost it's brakes, then this is certainly a book you want to read. After reading the first novel, of course, because there's a lot of background that you can probably pick up in context, but it's a lot more enjoyable if you don't have to.

As a master weaponsmith, and having a combat history, Steve knows what it is to be in the thick of it, having to put your faith, and life, in the control of a machine of war. Be it a simple knife, or a complicated piece of ultra-advanced aerial combat machinery, there's almost the same feeling... "Will this do it's job well enough for me to walk out the other side of this situation?" When the weapon is more than a match for the other guy's defense, the answer is usually "Probably." When it's not an even fight, or uneven in your favour, then you have to rely on whatever little extra YOU bring to the fight... and in this story Steve has created a team of combat engineers who embody both parts of that title in admirable quantities. Led by the enigmatic and intuitive Major Michael Longbow, the crew is an oddball assortment of brains, brawn and balls. Each one has a history, though so far you dear reader, have only been gifted but a small portion of the whole, it seems to me... there's just a feeling, especially after some revelations in the last book, that pretty much everyone on the Basalt crew has a life, a past life, a hidden life, and a secret life... each. They're a bit like ogres in that regard... or onions.

This book brings with it more of the "big picture" storyline, having done a lot of the character introduction in book 1. We are given insights into the political back-play going on, the real nature of the Administration and Game Board policies, and even a deeper insight into the mysterious and powerful Haulers Collective. On top of that we get some historical background into the Infant Conflict alluded to in Book 1. Oh, and of course - how could I forget - a revelation or three about Urchins that kinda blows things wide open in places. In the process of all of this, we find out just how deep the rabbit hole goes when it comes to black-ops deals between the Haulers, the Administration, the Games Board... which goes to show that sometimes the dividing line between "Good Guys" and "Bad Guys" isn't always clear, crisp, easy to spot, or even there at all!

Overall, this is an excellent second installment in the "Fury of Aces" trilogy. One of the neatest things about this book is the appendices at the back. They are clear evidence of the amount of thought that has gone into building this universe and populating it with an impressive array of exciting, thrilling and nefarious characters. I sincerely hope there are further titles set in this universe, and that it escapes from the pages and makes it's way out into our world, even if only in the form of Fan-fic movies, models, or artwork. It has already begun, if Steve's Facebook page is anything to go by, because he's gone ahead and built himself scale models of some the craft and weapons... one of which - the Skua - was used on the cover of this book, albeit digitally edited slightly to add fire and bullet holes, etc. That's just real Kiwi Legend stuff right there.

Finn's life in the village of Wichant is hard. Only his drawings of the wild coastline, with its dragon-shaped clouds and headlands that look like giants, make him happy. Then the strange housekeeper from a mysterious clifftop mansion sees his talent and buys him for a handful of gold and then reveals to him seven extraordinary ... more...