Magic in the Shadows review 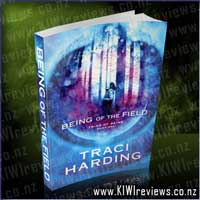 Triad of Being : 1 : Being of the Field product reviews

The power to control the driving force of the universe has finally come to light.

At the university on Maladaan, Taren has studied everything from genetics and cell communication to quantum physics, astrophysics and ESP. She believes there is an ocean of microscopic vibrations connecting everything in the universe to every other universe - an inter-dimensional field theory.

Unbeknownst to Taren, her research and hidden psychic talents are the reason she is called on by the prestigious AMIE space project to investigate an ocean planet and it's strange light phenomena.

However, there are conflicting agendas within the organisation and she is the only one who begins to suspect that foul play might be afoot...

The Mystique Trilogy : 2 : The Dragon Queens

When I first caught sight of the cover, and the title, my first thought was of a story based on a young girl on a farm or some other rural aspect... I could not have been more wrong. This is an excellent example of the old addage "Never judge a book by it's cover" because if you do, you will miss out on one of the most intriging sci-fi stories I have come across in the last five years.

Exploring and integrating such topics and plot elements as paranormal abilities (conveniently categorised into 12 main groups, or "Powers"), quantum physics, higher-dimensional intelligences, human (I think) evolution along a mammoth scale, Noetic science, alien planets, space travel (over interstellar distances), mental entities (they are still of THIS set of dimensional planes, but are non-physical and hardly god-like)... this one story has it all... and it's only part ONE of a trilogy! Oh, yes there is a bit of the 'gushy mushy love dovey' in there too, with a bit of kink thrown in for seasoning... so teens and up only, this is not really a tale suited for pre-teens.

I was impressed at the eventual depth of the characters, though it took a little while for the story to reveal enough to take away that 'flatness' that can sometimes be the make-or-break of a story... and there were certainly plenty of plot twists... though as one friend commented after me describing a typical chapter late in the book to her, "It sounds like there is the potential to annoy readers." What she meant was that the constant "Oh, the tension is building to a climax, we're coming up on the ending..." only to find that just before the final peak, something else intrudes to derail the plot for another chapter or two. Honestly, I got the feeling that the author had the tale all sewn up into a single-book novel, and at the last minute thought "Ohhh, what if..." and tacked on another couple of chapters... then repeated herself a few times.

Having not read any of Traci Harding's work before, I didn't know what to expect, but another friend, an avid reader of her work, did comment that this tactic was quite unlike Traci's usual smooth, well-planned style. I certainly hope Book 2 is a little less 'rollercoaster' and a lot more 'blockbuster' becauise the premise of the universe is quite appealing to a SCI-fi (Yes, caps are deliberate - I like a little 'fi' with my 'SCI') geek like me, and I am craving more!

Overall, this one is one of those 'off the beaten track' titles that has you off-balance pretty much the whole way through. Just when you think you know what is coming, it doesn't, and something else leaps in the way instead. For those who don't like fairlt-predictable, this one is worth exploring. There's a nice cliffhanger at the end that should lead into the next book fairly easily, so... roll on Book 2!

Pierre Jnr has a mind more powerful than any the world has encountered before. He can make you forget, he can control you and he is only eight years old. Three months after his birth he escaped. An hour later he was lost to surveillance. No one knows where he has been for the last eight years ... Now Pierre Jnr is about to return.

THE HUNT FOR PIERRE JNR follows the activities of an elite group dedicated to tracking down the eight-year-old boy who is currently the greatest threat humanity has ever known.