ProdID: 2393 - Magic in the Shadows
Written by Devon Monk 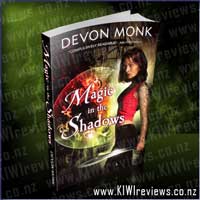 Magic in the Shadows product reviews

"Every time you used magic, it used you back. Sure, you could magic yourself a photographic memory for that big test, for that big interview, for that big stock market job. And all it would cost you was a nice case of liver failure. Or the memory of your lover's name."

Allison Beckstrom knows better than most there's a price to be paid for using magic: she's suffered her fair share of migraines and holes in her memory during her time working as a Hound, tracing spells back to their casters. But now Allie's been visibly marked by it.

On top of that, she can't remember much of the last few weeks of her life - including the man she supposedly fell in love with. But things are about get worse.

Allie's father, a prominent Portland businessman, has died recently, but he's not about to go gentle into that good night. He was a powerful sorcerer, and his spirit wants to trade magical knowledge in exchange for real estate - inside Allie's head.

A most excellent addition to the series, this third installment shows us a lot more detail about the types of magic, and the various 'power levels' it can attain. Here we are introduced to many of those in "The Authority" and learn a lot more about what they do, and what they have been doing for a very, very long time... and just what they are protecting.

With some zany characters, such as death-mage Shamus, a young Irish chap with a real attitude on his shoulders, but a heart of gold... Jingo Jingo, with the power to kill at a thought and a soul more warped and blacker than his magic, Mikhail - former grand-slammer in the magic world, and now seeking a way to walk freely between the realms of living and dead thus becoming effectively immortal... plus a whole swadge of other characters... mostly all good guys in their own eyes, even if they do some pretty low-down things at times.

The way in which Devon brings the 'reality' of magic, it's history and potential useful, or abuseful, future to life is nothiong short of incredible. The details are all there, without drowning out the storyline or the events happening to the characters in the least. Like Allie at an upwelling, it's full to the point of bursting, but contained just long enough to be all-absorbing... then rushes out at you like a tidal wave. You just can't help but be captured by it, rolled along by the sheer force of it, then left, gasping, at the end wondering how you managed to get through it intact yet still wanting more.

Overall, another brilliant offering from the talented Devon Monk, and I just can't wait to wrap my eyeballs around the next book... because this story is FAR from finished!

Score: 8.9
Product reviews for listing 8812: There's a Bear in the Window -  Written by June Pitman-Hayes and Minky Stapleton

"There's a bear in the window of the house on the farm. It's wearing gumboots and has a sore arm!

"I wonder what I would see, if I were that bear and that bear were me?"

Do you have a bear in your window too? This story and song in both English and Te Reo Maori celebrates the great teddy-bear hunt that entertained thousands of children during lockdown in 2020.

The story is written by June Pitman-Hayes ... more...