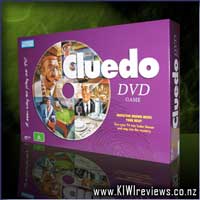 Disclosure StatementFULL DISCLOSURE: A number of units of this product have, at some time, been supplied to KIWIreviews by Hasbro (NZ) for the purposes of unbiased, independent reviews. No fee was accepted by KIWIreviews or the reviewers themselves - these are genuine, unpaid consumer reviews.
Available:
at quality toy retailers

Who, What, Where and When?

The usual suspects are wreacking havoc at Tudor Manor, and Scotland Yard needs your help! Can you crack these challenging interactive cases, plus unlimited others in the special bonus game?

The DVD brings you inside Tudor Manor where Inspector Brown is waiting with information on events of the day. Ashe the butler is also there, ready to share some clues of his own. Remember to stay alert! You never know what you'll find in a room or run across in a secret passage.

Like classic Cluedo, you'll make suggestions, but in Cluedo DVD your accusations are made secretly using the DVD. Be sure to keep that red Reader close at hand, there are secrets in these cases and information you'll need to decipher.

Featuring 2 new animated characters who also give hints, tips and challenges on the four hours of animated mystery solving DVD footage and 2 new board locations.

This game is awesome! However it is different to the one I played donkeys years ago! Back then it was catch the killer, now it's catch the thief!
This game is by far superior than the standard game. It has more characters, 2 more locations and an inspector that drops in from time to time, and a butler to help you by giving more clues away.
I found the animation in the game good, however it would be good if the butler and inspector looked more realistic. Also the secret passage ways all looked the same, it would be nice if they had a couple of variants so you don't get bored with going through a secret passage. I love the fact there are padlocks at the start of the game so no one can use a secret passage until they are unlocked.
This is definitely a game where you need to read the instructions, even if you have played the old game. The instructions are useful! Since I "forgot" to read them the first game we had, we had to conclude a buggered up game and start from scratch.
The board looks well thought out, and is even better with two extra outdoor areas added, as it expands the game further.
In certain parts of the game you need be a detective yourself to earn the right to see certain cards in a room on the board.
It's great how there are 10 different cases to be played, and also general cases that can be played. That's a heck of alot of Cluedo before you can get bored with it!!
I think it's a great idea to have the red readerthing when you go to make an accusation, as typically you are the only one to know the who what when where you are accusing.
You need to be aware that this is NOT a quick game as it took 3 players just over two hours to complete!
The only downside I could find was I think the Inspector interrupted the game too much, and that you had to use the remote a lot, but I guess that happens when you are playing a dvd game, it just takes a while to get used to. Also I don't like the fact that when the Butler goes off duty the option to use him stays on the screen so you think you can use him, then he just keeps repeating he's now off duty for the night, and do something else for your turn.

Not a big fan of the dvd games, they usually seem dull and lifeless.
With this one I was happily suprised. Cluedo is one of my favourite games, and the dvd version expands on the game well.

The inspector dude does kinda speak to you like you're stuck in slow motion and just graduated from nappies, and gets a bit annoying when he cuts in half way through your turn but otherwise its a good addition.

Extra goodies on the disc are the challenges you need to solve to get extra clues. And its done well so the other players are kept in the dark, unless they have an eye for picking out patterns.

In a way its more like the 'How To Host A Murder' games on a board. So it's not bad, doesn't top the original but something different and didn't disappoint.

Crikey, this one takes me back a bit further than I care to admit

... I remember playing the original version of the game with my family back when I stood knee-high to a grasshopper. It wasn't half as fancy as this, and it was all about finding a murderer, but back then, Agatha Cristie's 'Poirot' and the ever-favourite Sherlock Holmes were all the rage, so it wasn't surprising really. These days, we see plenty of 'dealing with the dead folk' on TV so it's nice to see a game that's a little 'softer' that we can play with our tech-savvy kids that doesn't require three years operative training with the SAS and a degree in forensic anthropology just to understand the plot!

Unlike the original version, this game is all about finding a petty thief, who has stolen something, from one of the rooms, at a certain time of the day or night... 4 variables to deal with, which is one more than previously. Add to that 2 new locations, the interactive assistance of two non-player characters, and some nifty psuedo-random programming to shake things up a bit... and you have a highly enjoyable way to blow away a few hours.

Now, for the seriously nerdy (and that's not a derogatory comment, for the geek shall inherit the earth) I must include this caveat... DO NOT play this on a PC unless you run software that can emulate a full remote handpiece! Simply put, there are certain buttons you need to press at times, that will stumble you if you picked the wrong software to play the game through. Media Player is NOT going to cut it for this one.

Because of time constraints, this time around we picked a pre-defined game and bent the rules a little. Instead of 'suggesting' players only being shown one card from their suggested trio of variables, we bumped it up to two cards, just to speed things up a bit. This turned out to affect the game quite strongly, as it allowed us to reach the point of 'Making an Accusation' about an hour sooner than we would otherwise have done. A great trick if you suddenly realise the dinner is getting awfully cold while you are all lost in the fun.

Overall, a wonderful game, well worth exploring and, thankfully, quite safe for the whole family, though older kids will find it easier to get to grips with. The gameboard suggests ages 10 and up, but a smart 8 year old would handle it well enough with minimal supervision, methinks. The extensive use of the Red reader was very well done, and made the game highly enjoyable, and the best bit is that if you lose the red magnifying glass at any stage, dig out your old pair of 3d shades and you'll be set! if you are playing a pre-defined game, you are given step-by-step instructions by the DVD on how to set it all up, so you can jump in pretty quick and get on with the game sooner. Maybe seen as a little pricey, but if you time it right you can probably shave $5-$15 off the price at a sale and find yourself the proud owner of a stunningly fun boardgame!

Itâ ™s senior year at the Horribilorum Sorcery Academy for Witty Witches and Wizards. All the hard work and studying comes down to this: the final exam! Under the helpful tutelage of the Headmaster, players have learned how to handle volatile ingredients and turn them into fantastical potions!

In Potion Explosion 2nd Edition, players take on the role of students trying to pass their final exam for the year. To do this, theyâ ... more...