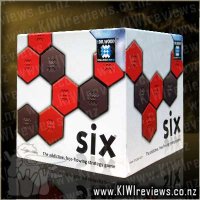 A fantastic game of pure strategy. Be the first to create one of the 3 possible winning configurations, whilst trying to prevent your opponent from doing the same.

This game didnt really grab me. I found it too difficult to keep track of all the trouble spots as the game progressed, and basically got my butt kicked every time. In good form, I politely declined to play a fourth game and instead left the table to seek other options after three whuppings.
On a more objective note, the game was a lot of fun to watch. Seeing someone else blindly placing pieces while an obvious trap looms ever closer is far more my style than being the one in the "What do you mean thats six in a row?!" seat.
The game is fairly solidly made and a very creative concept. Its a bit like Connect-4 in some respects but instead of just a line, you can also aim for rings or pyramids. Get any one of those shapes made up of only your colour and thats it you win. As long as your opponent didnt do it first of course.

All in all even though it wasnt really my kind of game it certainly was fun to watch and other players seemed to have a ball. Many of the games were fought down to the last piece and more than a few well-matched players fought to draws time and time again. I would target this game at the under-30 market, as older folks tend to battle to a stalemate more often than not.

This has to be my all-new favourite strategy game, knocking Cathedral off it's perch. (And I mean no disrespect to Christchurch when I say that, of course.)

As with most of the Dr Wood games, this is simple to learn, yet hard to master. Each player has 22 hexagonal tiles. To win, you need to get 6 of them in one of three winning patterns... a straight line, a ring, or a triangle. Your opponent's observational skills are your enemy, your wit and skills of distraction are your weapons... let battle begin.

I played this against my 10yr old son, who is quite the strategist when he wants to be... the first game was mine in a crushing victory... the second game had us still 5 moves from the end when I snuck a winning piece into place... our third game was a battle down to the very last tile... and the fourth game. which rounded off the end of an hour of play, was only won by fluke, as a winning pattern was spotted at the last second, on the opposite side of the assembly to where I was trying to win.

Now, if a 10yr old can not only pick up the game but fight a strategic/analytical adult to a stand-still, then the game surely has appeal to all ages. A great way to genuinely let the kids beat you at something that doesn't (or at least shouldn't) squash your adult ego too badly.

Overall, I would have loved to have given this a full-10, but alas, it's not a game to be played anywhere... you need a fairly decent flat, stable surface to play on. I am tempted to install magnets in the base of each tile and make a metal playing board for this, and some other Dr Wood, games I quite enjoy. Then this could be played at any angle, at almost any location, in almost any weather (if that's your thing).

The planes. The pilots. The passion.
One hundred years after the Wright Brothers achieved their first landmark ... more...