« Magic to the Bone review

ProdID: 2228 - Magic in the Blood
Written by Devon Monk 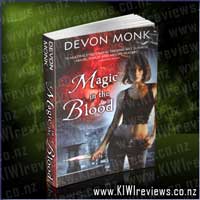 Magic in the Blood product reviews

Allison beckstrom knows better than most that when magic's involved, nothing is free. She's had to pay its price of migraines and forgetfulness while working as a Hound, tracing illegal spells back to their casters. And even though magic has stolen her recent memory - including her history with the man she supposedly fell in love with - Allie isn't about to give up on Hounding or the city she cares about.

When the police ask her to consult on a missing-persons case, it seems an easy way to pay the rent, but the trail leads Allie into a dark, dark underworld of criminals, ghosts and blood magic.

There, Allie discovers it will take more than just magic to survive.

As I encountered this book first, and then had to go back and read book 1 - Magic to the Bone, I found myself thinking the whole time "This reads like it should be a sequel..." but for the life of me I couldn't find any mention of book 1 on the inside cover as is normal with sequels. However, a bit of research and I was bouncing around in my seat with anticipation, because this book so hooked me I *needed* to read more, and couldn't wait for book 3 to come out.

I was particularly taken with the premise of this world, where magic is not only real, but has been harnessed and commercialised, but like all drugs of choice, it takes a toll on the (ab)user. The price for using magic is pain, and though you have some control over how it will manifest (by setting a Disbursement as part of the lead-up to casting) you basically can't escape the penalty, unless you are either an official, casting on behalf of an authority, or you are very naughty and try an illegal Offload, where you channel the payback off to another person.

What also impressed me, though it was only mentioned in passing, is that when the city council authorise a mass usage of magic, the city as a whole pays the price, with the payback being shunted and Offloaded onto the prison population. Now *THAT* is what I call paying a debt to society! For example, a power-cut takes out street lighting for 6 blocks, and the prisoners all get bad flu for a couple of days as payment for the magic surge required to keep emergency lighting in effect to prevent motor accidents. How could that NOT be an incentive to walk the straight and narrow?

The main character, Allison Beckstrom, is still trying to recover after a massive magical battle not only knocks her out, but also takes it's double-penalty of stealing large chunks of her recent memories, including how she feels about Zayvion Jones, the convoluted intrigue they are both embroiled in, and why she has been branded by magic in a way that allows her to beat all odds, and store magic within her very bones... something that usually causes massive internal organ failure and a painful death for those who try it.

Not only will Allie rediscover a lot of her lost past, but a whole heapin' helpin' more about the Authority, her place in the grand scheme of things, and why some very powerful people *really* want her to curl up and die quietly... but not before they use her for their own ends. If she thought her life was tough now, by the end of the book she's going to realise she's been living in Easy Street up until now.

Overall, this is an amazing sequel, and I only wish I had read it second, as knowing this book made reading book 1 a little anticlimactic. It's a great continuation of the story, but if you can't find book 1 then this still stands well on it's own, despite the feeling you're missing out on background info. I guess that's an upside of a character who suffers massive memory loss, *they* have to relearn it all, so it makes it easy for you to empathise and get in their place. Roll on Book 3 - Magic in the Shadows.

Eight jolly reindeer flying with delight. Merry Christmas to all, and to all a
good night! Young readers will love counting down from eight to one in
this adorable story book featuring Santa's famous reindeer! The familiar,
catchy rhymes combined with Jacqueline Rogers' soft, sweet illustrations
make this a perfect story to celebrate Christmas!