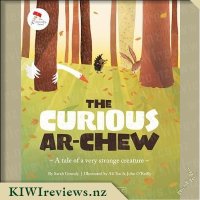 Disclosure StatementFULL DISCLOSURE: A number of units of this product have, at some time, been supplied to KIWIreviews by Scholastic (NZ) or their agents for the purposes of unbiased, independent reviews. No fee was accepted by KIWIreviews or the reviewers themselves - these are genuine, unpaid consumer reviews.
Available:
August 2017

This is the tale, I swear it is true,
of a very strange creature called the Ar-chew
The tale begins at the foot of a tree
with a hollow so narrow it was tricky to see...

Three forest friends find a mysterious, mixed-up creature in a hushed, hollowed hideaway. What a fright they get when they try to come to the rescue!

With illustrations by Ali Teo and John O'Reilly

What child doesn't love a book that is about a tale of animal friends, whenI requested this book I must admit I wasn't absolutely sure what the book was to be about however seeing that there were animals on the front I was certain that Miss 4 and my daycare children would love it! Also seeing that it had been honored with the Joy Cowley Award meant it must be good.

The story follows a group of animal friends on an adventure through the woods after they find a very curious creature hiding in the hollow of a tree asleep, together they set off trying to work out what this creature is which doesn't prove to be the easiest of tasks. They search for places that perhaps the creature has come from, maybe a rabbit burrow? At the end of the story all is revealed that the strange creature is infact a little girl, the animals all along had wanted to help the creature and befriend it however the little girl got scared and ran off never to be seen again.

The illustrations in this book were gorgeous so bright and I loved how they looked just like that of a forest with tall trees and grasses, even shadows, the children at work said it looked a lot like the centres gully where they like to go and run and hide whilst looking for birds and bugs which I guess is why they loved this book so much as it allowed them to be creative, and gave them a sense of wonder as to what the creature may have been.

I loved some of the hidden messages behind this book as did my colleagues such as working together, being friends with others who may appear different to yourself and also not being afraid of the unknown such important things for young children to be mindful of and this book portrayed these messages just beautifully.

What a beautiful story The Curious Ar-Chew turned out to be, one of the very best books which I have read in a long time, one that was so full of wonder, excitement and surprises and one that even had me in suspense as we found out that the curious ar-chew was in fact that of a little girl sneezing, when throughout the whole story I believed that it was going to be a sheep, it goes to show that a good children's book can be enjoyed by all, both young and old! A great book which totally deserves to receive The Joy Cowley Award. Miss Three absolutely loved the word "ar-chew!" To me, it sounded rather like a sneeze, but for Miss Three it was a word to play with, to roll round her tongue, and repeat over and over. Some words appeal to little ones because of the funny way they sound; this was the cause of a lot of fun for her and there was lots of giggling involved!

The words in this book were a little more challenging for Miss Six than the text of the last book she had read, so both girls snuggled up so that their mother could read it to them. From the start, Miss Six was intrigued as to what the mystery creature could be. Hedgehog and Goose, too, were totally puzzled; although the creature had feet like Goose's, it could not be a goose because they don't sleep in trees. (Miss Six said she knew that already.)

The next suspect was a rabbit, but further investigation proved that this too was incorrect. Rabbit joined Hedgehog and Goose and assured him that it was not one of his relations. Miss Three liked the rabbit; she enjoyed the pictures of all the animals, but the rabbit was the one she liked best. Miss Six, however, liked all three. When the creature in the tree finally woke up with a big "arrr-cheww" and Rabbit, Hedgehog and Goose got a fright, Miss Six laughed so much that she fell off her chair. She thought it was so funny that they ran away from the noisy creature.

There is a nice subtext to the story about welcoming a newcomer and befriending it, even before you have met him. All three animals want to find out who the new creature is, and even after their fright when they wake him up, they still want to meet up with him and make friends. They even leave out food in the hope that it will encourage him to return and touch base with them. The story ends on a positive note, with the three friends all hoping they will catch up with their mysterious Ar-Chew one day.

The pictures complement the story perfectly - they show images of trees and grass, hinting at the Ar-Chew's natural habitat and also implying that he is a creature that either hibernates or at the very least is an extremely sound sleeper. The dominant colours are autumnal, implying that if the creature is hibernating, he has only just tucked himself away and is then forcibly woken up, meaning he has to go and find a different place to hibernate - leaving only peculiar prints to hint at where he has gone.