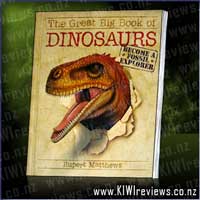 The Great Big Book of Dinosaurs explores the world of these remarkable reptiles, and how scientists, called palaeontologists, uncover the secrets behind dinosaur remains on their archaeological digs.

* Fantastic artwork and fossil photographs
* Scale for each dinosaur to see how big they really were!
* Factfile for each dinosaur, including a pronounciation guide
* Fascinating WOW! facts to amaze every reader
* Glossary to explain new or difficult words

This book was perfect for my son who is totally fascinated by dinosaurs and is keen to learn everything he can about them.

There are many reasons why this book is perfect, firstly is it's easy to understand layout. The book is broken down into 4 sections with each section giving you a wonderful array of information, the first section is all about families and covers most of the facets of a dinosaurs life from egg to death, with each subsection looking at a different species of dinosaur.

The second section covers food, and so of course covers the many different types of food that various dinosaurs actually ate from the standard herbivores and carnivores through to the dinosaurs that had more specific tastes like lizard eaters.

The third section covers combat and looks at the many different ways that dinosaurs attacked each other, and defended themselves from predators.

The final section will perhaps be the most used section of the book as it is the Dino Guide. The Dino Guide is broken down into the 3 periods in which dinosaurs were active, and contains some basic information on each dinosaur, such as how to pronounce it's name, it's length, it's weight and it's diet. I found this section to be great as I always thought that the Stegosaurus, Triceratops and Tyrannosaurus existed in the same period, so I was shocked to discover that the Stegosaurus was around in the Jurassic Period (206 to 145 Million Years ago) and the Triceratops and Tyrannosaurus were around in the Cretaceous Period (145 to 65 Million Years ago).

Overall this is a wonderful book and a great learning aid.

This book is an awesome addition to any dinosaur fan, especially as a school resource for projects. The Great Big Book of Dinosaurs book is jam packed with interesting facts on dinosaurs, including which dinosaurs were around in a particular period of time.

The book covers all three periods, a) The Triassic Period, b) The Jurassic Period and c) The Cretaceous Period. It also reveals where fossils can be found, eg. in England, Australia, Germany and many more areas, the types of food that each dinosaur ate, and how how the different species co-existed together.

This book is well designed. It has a lot of information, but it is produced in such a way it isn't overwhelming. I love the fact they have lifelike drawings included, and also a dinosaur to human ratio.

This would be, as i said earlier, a great educational resource, especially for primary/intermediate pupils. Each dinosuar name is broken down to make it easier for everyone to pronounce it. ie: leaellynasaura (lee-ell-in-ah-saw-rah) found in Victoria, Australia 110 million years ago in the mid-Cretaceous Period.

The book has an extensive glossary and summary of each of the three periods also.

The book is a hardback book with the pages ringbound. The cover is very eye catching, as it looks like the dinosaur has ripped through the book and is waiting to eat the person holding it.

There are 99 pages of gigantic facts on dinosuars in this most riveting book.