The Dinosaurs of Waterhouse Hawkins review 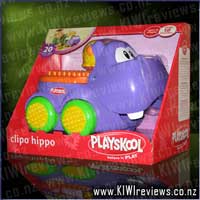 Disclosure StatementFULL DISCLOSURE: A number of units of this product have, at some time, been supplied to KIWIreviews by Hasbro (NZ) or their agents for the purposes of unbiased, independent reviews. No fee was accepted by KIWIreviews or the reviewers themselves - these are genuine, unpaid consumer reviews.
Available:
at quality toy retailers

Roll out the hippo and encourage your little one to build all sorts of colorful creations with interlocking, peg-covered CLIPO parts. Whether it's standing still or being rolled around, the purple hippo is filled with fun! Open the hippo's mouth to 'feed' it blocks, or just have fun adding and removing them from the storage area. Kids can attach blocks to the hippo's back, or to its wheels.

Curiosity and delight will grow as toddlers design their own creations again and again. When playtime is over, all the pieces store inside the hippo!

•  Colorful hippo toy encourages little ones to build all sorts of creations while interlocking the peg-covered CLIPO blocks to each other, and to the hippo!
•  Hippo's mouth opens wide, blocks store inside!
•  Rolling wheels for on-the-floor fun.
•  Hippo comes with 20 CLIPO parts.
•  Ages 18 months and up.

I gave my daughter the Clipo Hippo along with several other Clipo sets for Christmas when she was 17 months old. At this age she was really only interested in using it like a car and stuffing things inside. At about 20 months she was trying to use the Clipo pieces to build things.

The Clipo pieces are very hard ,even for adults, to use to construct things with. They certainly don't clip together easily.

We have had our Clipo sets for over two years now and have never had anything break. It is durable and built to last. It is easy to clean in a bucket of soapy water too.

Another great hard-wearing and durable toy from playskool. This toy has fantastic bright colours and the fact it has 'wheels' is a winner in our house. Clippo was a favourite toy of my sons at around age 2.....i personally found it hard to create decent looking creations, but the ease that the blocks go together was a winner for Mr2 at the time, he loved to build towers on top of the hippo as they click together very easy.

The blocks that end up in mouths are easy to clean, just by popping them into the dishwasher! The mouth movement of this toy amuses the little ones for hours, first trying to work out how it works, then by actually playing with it. This is a toy that grows with the child's age. Mr3 still plays with this and his clippo table. Love the fact the the blocks are in different colours and i can request a coloured block and we practise our colours whilst building. Overall this toy is a great addition to your clippo set, but i wouldn't recommend it if you didn't have any other clippo to add to it.

The Clipo range in it's current incarnation, hasn't been around in NZ for very long... but what an impact! Designed for the 18+ month bracket, my little 10 month old adores his Clipo! He has taken a particular shine to a particular design block and is hardly ever seen without he beloved 'Blok' in his hand, mouth or within reach. If he happens to spot one lying on the ground, he's top-speed-crawl to grab it before eveil mummy or daddy can scoop it up and stick it away.

Though he still doesn't have quite the dexterity to assemble anything, he's all to able to stomp or smash any assembled structures... much to the amused annoyance of his older brother who enjoys spending time with his little sibling each playing half of the lifecycle... older borther builds, younger brother wreaks vengence and destruction down upon it, with copious giggles and drooly grins to soften the blow.

Durable and sturdy, the hippo has become a favoured part of the play, with it's little yellow avian companion faithfully being abused along with the hippo. Frantic gumming, drooling on and throwing of, have become hallmarks of 'Clipo Time'... to the point where a plastic groundhseet is almost a default accessory. Both boys love giving the hippo a makeover, with longer blocks being attached to the wheels, giving hippo revolving sets of legs a favoured bit of surgery.

Though told that the hippo 'eats' the blocks, our young boys, in typical boy style, have also realised that the reverse is also true, with hippo often found scooting backwards 'spilling' blocks from his mouth, to the sounds of 'male youth humour' shall we say.

Overall, an excellent, if slightly pricey addition to the Clipo range. As is to be expected, works perfectly with all other clipo kits, including the much-adored-here creativity table whose motorised cog is often being 'borrowed' to drive Hippo around the room. (It really is amazing how you can use this tuff outside of it's 'normal' parameters and have the most amazing constructs!) If you have kids aged between 9months and 90 years old... this is a seriously fun toy for them. (The older ones will have a blast inventing things for the younger ones to abuse. I know I do!)

As a Dark Lord of the Sith, Darth Tater was once a promising young Jedi who lost his roots.

Use your imagination to create all sorts of wacky looks and funny faces.