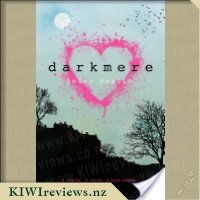 Outsider Kate has a crush on the coolest boy in school, Leo. He's inherited a castle, a menacing ruin on the rugged English coast. When he invites her along for the summer, she finally feels part of the gang.

But Darkmere's empty halls are haunted by dark ghosts. Two centuries ago, Elinor - the young wife of the castle's brooding master - uncovered a dreadful truth.

As past and present entwine, Kate and Elinor find themselves fighting for their lives - and for the ones they love.

This book managed to surprise me, usually two characters switch in time with rather funny results but this was different. No switches but two really interesting stories, the dark family secret was rather easy to figure out from the clues and I sat there thinking "is that it? ".

The story was well written, there were some twists and some were unexpected but that made it really hard to put the book down, at some points I was so exhausted that I struggled to keep my eyes open but I still wanted to know what happened next. There are some parts that aren't really pleasant to read but things happen and readers should be able to ask a parent for help or advice if needed. I wouldn't let my young boys read it until they are older and even then I would be prepared to answer questions.

I must be weird as I enjoyed the secret tunnels and long forgotten dungeons that were part of the family secret. The author handled the suicide of one of the characters quite well (didn't dwell too much on it).

I would recommend this book to slightly more mature readers, some of the topics covered might cause bad dreams and for parents to be available if the children have questions. I hope to have the pleasure of reading more of this author's books as it was well balanced and really hard to.put down.

I enjoy ghost stories. When I realised that "Darkmere" was not just an adventure story for teenagers with romantic overtones, but was also a ghost story in the best Gothic tradition, I could not wait to read it. Even before I started the book, I was intrigued, on flicking through the pages, to find that there were two distinct fonts used to differentiate between the two stories - one set in modern times and one set two hundred years ago.

The stories of Elinor and Kate are both tales of romances complicated by events outside their control. The author has varied the writing style along with the font in order to increase the effect of there being two different stories. Despite their being linked through the common theme and setting, they are self-contained and can be taken as two separate tales. I found that I really enjoyed the change in font and style when crossing from one story to the other as it helped to set the scene and background and to make the transition easier.

The narration was compelling; I found myself totally immersed in both stories and particularly enjoying the scenes that described supernatural events. There is a certain skill in convincing the reader to accept that the paranormal is part of the real world, and the inclusion of a haunted castle, forgotten dungeons, secret passages, and remote settings only add to the excitement. Certainly the book more than lived up to expectations in this respect and I was reluctant to stop reading because I was keen to know what would happen next.

I did have a couple of issues with the book. I can see it as being read and enjoyed by many young teenagers, so I thought the passages describing the use of recreational drugs were inappropriate. I am not out of touch with the modern world and I know these activities do go on, but I was concerned that the book normalised the behaviour rather than referring to it in passing as something a few of the characters did habitually. I think these sections could have been written in a slightly different way so that the drug usage was still mentioned but was not accepted by all the characters. I also thought some of the language was not suitable for a book designed for young people. This, and the tacit acceptance that taking drugs is normal at any age, would be enough for some school librarians to reject it from their shelves. I am aware that the characters were all in their mid to late teens but many of the target audience would be much younger.

In conclusion, apart from some of the drug references and the occasional inappropriate word, I really loved this book. It is well crafted, and certainly kept me enthralled from start to end. It has all the elements of a fast-paced Gothic thriller and captures the two different worlds of the heroines, Elinor and Kate, with strong attention to detail. All in all, a great yarn!

Being manipulated by mega-beings so advanced that they created history as we know it (Dan Quayle was an idea they can confidently call their own) and who treat the galaxy as their own personal theme park is not that easy...

Not when you are armed with the inspiring knowledge that failure in the next round of the Galaxy Game means death. Nor when you have been landed with a new team member called Fonking Fission, whose acid tongue ... more...