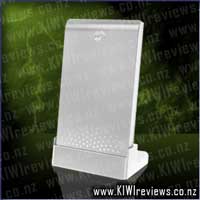 Disclosure StatementFULL DISCLOSURE: A number of units of this product have, at some time, been supplied to KIWIreviews by Seagate Technology or their agents for the purposes of unbiased, independent reviews. No fee was accepted by KIWIreviews or the reviewers themselves - these are genuine, unpaid consumer reviews.
Available:
at quality retailers

Compatibility may vary depending on user's hardware configuration and operating system.

(Not all colours available)

When it comes to portable storage devices, there are a few key factors that simply *must* be held to the highest standard, or you are basically asking for an accident to happen. Such factors include:
•  Size and weight of the unit
•  Durability and shock-tolerance
•  Storage capacity
•  Read and Write speeds
•  Ease of use
•  Power consumption
•  Noise factor

That's a fairly sturdy list to address for any manufacturer and, let's face it, some just don't measure up when put to the wall. On top of that, there are the 'cosmetic' factors to consider too, because we can all agree that if it looks like some half-blind trainee using a soldering iron for the first time ever put it together out of scraps left over after smashing a radio clock, only the seriously geeky are going to tolerate it. (They'd probably think it lOoKeD '1337!) However pulling something streamlined and stylish out of your valice in front of a client is going to help your image a fair bit. Some of the cosmetics worth keeping in mind when making your purchase could include:
•  Lighting patterns, dynamics and colours
•  Fashionable colours to match your other electronic accessories
•  Overall chassis shape
•  ...and a couple of the more functional aspects fit here too, like noise and size.

I have played with a few removable/portable storage devices in my time, some really blew me away, some just needed to be blown up. I have to say that I wasn't too sure what I should expect from the FreeAgent Go... but I sure wasn't expecting what I got.

Let's start by addressing the functional side of things... The unit itself is tiny. Quite literally, you could fit two of these inside a bog-standard DVD case! (OK, you have to carve out the raised disc-pad inside first, but hey, a small price to pay in the name of good reviews...) To add to that, it weighs in about the same as only three DVD single-disc cases with discs inside. Quite impressive, when I considered that I was reviewing the 320gb model. (After taking into account the filesystem space and conversion from decimal-bytes to binary-bytes, this gives you a 'true' usable space of 296gb.) The drive inside is a beasty little 2nd generation 5400rpm laptop drive. You can also get 250gb and 500gb models in various colour combinations. Full details on the Seagate website.

Read and Write Speed test results were exceptional... It is often the case that the published speeds are far from reality... the difference betrween a lab test under optimal conditions and a clean install machine, vs the reality of a messy machine out in the world getting thrashed and abused on a daily basis. I threw a series of 1gb testfiles at it, ranging from a 1gfb video clip through to 1gb worth of assorted image and text files. The average speed results were pretty much the same for read and write, at a stunning 28.6mb/sec give or take a .1 or two.

At first glance, durability was a concern because of the small size of the unit. Clearly, you couldn't pack in a heck of a lot of padding and still keep it so slimline... but they managed to do a pretty good job, as giving it the good ol' "corner-spin-n-drop" test failed to kill it three times in a row. After that, I just didn't want to risk my luck any further. However, since Seagate don't publically post the actual shock-resistance value on their website, I am not entirely sure just how much punishment this unit is rated to take... but either way, it certainly is strong enough to cope with day-to-day abuse with ease.

Extremely easy to use, the drive simply plugs into any available USB 2.0 port with the supplied cable, and away it goes. Only one port is required for the drive, but for some strange reason if you use the optionally-available docking unit, you will need to find two ports available side-by-side. Very strange. No matter which option you choose, you'll find the drive is quite simply plug-n-go, with Windows easily finding and auto-mounting the drive, and all software preloaded on the drive itself. A few minutes of dealing with the auto-started software installer and you have full control over the drive, from it's power-saving hibernation, to even controlling it's nifty front lights. Just to note, if you do invest the extra $30 or so buying the dock, you'll also get a little protective slip-case for the drive, so great value there. Personally, I leave the dock attached to the office server, and keep the single-plug USB cable for using the drive on the laptop.

Cosmetically... well, the lighting pattern on the drive itself is seriously stylish, and can be turned on or off from the configuration utility, and for the very fashion-aware, the drives come in an amazing array of choices, from the standard blacks and silvers through to some seriously pompy options such as 'Champagne' and 'Sky Blue'. Finally, noise... frankly, there just isn't any to complain about. This was by far the most silent drive I have ever had the pleasure of using, and I know that this one factor alone makes the F/A-Go my 'Hit Pick' for the month.

Overall, one awesome little drive that will have no trouble appealing to anyone in need of a portable HDD. Be warned however, at last report, only the Royal Blue, Black, Red and Silver are available in NZ at the moment, but there are hopes that the other colour options will be winging our way shortly. There was only *one* incident that you will need to be aware of... if you also own, and have attached, and Maxtor external storage devices such as one of the 'One Touch' drives, you will notice that the Seagate configuration utility will detect and 'assume ownership' of the device(s) too... and this will cause you a MASSIVE headache at reboot time. I spent a good 2 hours trying to get back into the system, and in the end my only option was to boot into safe mode and uninstall the configuration utility. I can't say my life has been any harder without it, but it sure has been easier to get the work done. Since both Maxtor and Seagate are brands of the same firm, this 'hardware handover' doesn't come as a surprise to me, but it did disappoint me greatly, as I was looking forward to using the util to turn off the great cyclopean blue-lit 'One Touch' button bar on the Maxtor unit!

Your iPad 2, Your notepad.

Run from meeting to meeting or class to class without missing a thing. Closed, the keyboard rests securely underneath your iPad 2.

Open, it holds your iPad 2 at an ideal angle for typing and taking notes. Unlike folio-style Bluetooth keyboards, our Fold-Up Keyboard is full-sized for ... more...