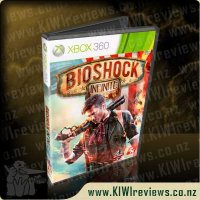 Thrust into the year 1912, players take on the role of former Pinkerton agent Booker DeWitt, who has traveled to the flying city of Columbia on a rescue mission. His target is Elizabeth, a young lady imprisoned since her childhood years.

During their bold escape, Booker and Elizabeth form a powerful bond - one which lets Booker enhance his own abilities with her world-altering control over the environment. As a team, they fight from high-speed Sky-Lines, in the streets and houses of Columbia, on giant Zeppelins and in the clouds, while simultaneously learning to harness a growing arsenal of weapons and abilities.

When a person plays a FPS (First person shooter) console game, there are usually prescribed aspects that are used to determine how good the game is, Graphics quality, Frame rate, Weapon flexibility and Multi player options to name a few. In creating Bioshock:Infinite Irrational Games (The developer) has managed to create a title that will certainly be remembered as one of the best of its generation by completely ignoring the traits that many consider essential for a successful title and there is little doubt that they have influenced others going forwards into the next generation.

Set at the turn of the 19th century, you assume the role of Booker DeWitt - a washed up individual who clearly has lived the kind of life that leaves a man looking at the end of each day through an empty bottle and starting the next turning the cap on a new one, Bioshock:Infinite not only tells you the story of how he got there but also where it ultimately leads him.

When you start the game, there is no introduction to give you an idea of the game play, or even what to do - you're on a row boat, accompanied by some as yet unidentified individuals who by their conversation, seem like they've played the game from start to finish, and are offering a 3rd person perspective on the matter.

This is where the RPG aspect of the game kicks in, as you explore, the story unfolds in a thoroughly non-linear manner, it's unnerving at first, but as you progress the gaps in the story are filled in by a clever combination of brief cut scenes that are triggered by certain activities and also using in-game items.

Right, it's at this stage that everyone needs to know that Bioshock:Infinite is NOT even remotely suitable for younger eyes to even watch, throughout a large portion of the dystopian world that the game is set in, the themes portrayed are a compilation of just about everything your parents, or even society tried to stop you from doing - Racism, Sexism, Slavery, Alcoholism, and just for good measure Children smoking! The 'shock' moments in the game are fairly common at the start but drop off as the game progresses, once you get past the halfway point in the game the need for such moments diminish and you're left totally engrossed in the storyline, which is complicated to say the least.

Vigors are gained by drinking various potions throughout the game, and range from giving you the ability to throw lightning, pull enemies towards you, or even summon a flock of crows who will go after your target like a scene from a Stephen King movie. You have three stats to maintain: Health, Shield and Vigor - Health and Vigor are finite resources, which you can replenish by scavenging food/potions/etc but your shield is handy, it depletes from being shot/hit, but will regenerate after a short period of time.

One of the many interesting twists that the game has is that your Health/Shield/Vigor can be augmented as you progress, by picking up certain potions it will present you with the option as to which of the three stats you would like to increase, where you can tailor your stats to suit your game play style.

Most people would never consider buying a FPS that doesn't even have a online multi player mode, but what makes Bioshock so vastly different in this respect is that the length of the single player only game is considerable, with the difficulty set on 'normal' this isn't a title that you can turn & burn in a weekend, you can expect more than a few evenings working your way through the 40-odd chapters of the game. Don't expect a easy 1000 gamerscore either, unless you're a serious gamer - completing this title on Hard will be, well - Hard.

On the topic of difficulty, as with most games you're presented with the usual Easy/Medium/Hard option at the start of the game, if you get stuck at any stage where the opposition are constantly getting the better of you, the game will even remind you that you can change the difficulty setting at any time, which is handy. I played through the game on 'Medium' but there was a moment later in the game where I relished that ability.

Once you complete Bioshock:Infinite, your perspective of how games should be made will be forever changed, its far from perfect graphics that would normally send a title straight to the bargain bin will be the last thing on your mind, you'll jump on the internet to find out what the various expansions have to offer, and then after all that - You'll loan the game to one of your friends, just so you can see the look on their face the next time you see them and say "I told you so"