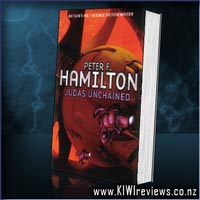 Disclosure StatementFULL DISCLOSURE: A number of units of this product have, at some time, been supplied to KIWIreviews by Macmillan Publishers Ltd or their agents for the purposes of unbiased, independent reviews. No fee was accepted by KIWIreviews or the reviewers themselves - these are genuine, unpaid consumer reviews.
Available:
November 2005

After hundreds of years secretly manipulating the human race, the Starflyer alien has succeeded in engineering a war which should result in the destruction of the Intersolar Commonwealth. Now, thanks to Chief Investigator Paula Myo, the Commonwealth's political elite finally ackonowledges the Starflyer's exitence, and puts together an unlikely partnership to track down this enigmatic and terrifying alien.

The invasion from Dyson Alpha continues with dozens of Commonwealth worlds falling to the enemy. The navy fights back with what it believes to be war-winning superweapons, only to find that the alien fleet has been given equally powerful weapons. How the aliens got them is the question which haunts Admiral Kime. Could it be that the Commonwealth's top-secret defence project has been compromised by the Starflyer's agents, or is the truth even worse?

I love a book that drags you kicking and screaming to the final page - and this was one of them. Drags you because you can't put it down - reading faster and faster because you want to know what happens, kicking and screaming because its so good you don't want it to end!
This was truly an amazingly written sequel to Pandora's Star. I was already hooked before I started reading this book, and it only pulled me in deeper. The imagery and descriptive text is unparalleled, and you literally see what Hamilton is describing. The characters are interesting, you can relate to them, and what's even better is that you know them in this book. You have gotten to understand them a bit in Pandora's Star, and so they become your friends, your enemies, and your betrayers. I cannot rave enough about this series - it is truly an amazing journey.

Wow, what a stunning conclusion to the story first started in Pandora's Star this time last year. Powerful, detailed, thrilling and full of suspense, this is one heck of a read!

This book not only continues the original tale, but it introduces a range of new technologies, characters, and even concepts into the mix... The story of Ozzie's trip through the Silfen Paths, and insight into their very nature... the ongoing battle against MorningLightMountain in all it's millions of interlinked minds, the ongoing search for the Starflyer and it's agents, and a stunning revelation as to it's true nature... plus a hundred or so mini-plots... it just hooked me.

Overall, Peter is an author I can really respect, with the ability to weave a tale with the best of them. If you like SERIOUS Sci-Fi, up there with the early masters such as Isaac Asimov, Arthur C. Clarke, or more recently Stephen Baxter and Iain M. Banks, then you would be well advised to hunt down any of Peter's titles and invest in them. You won't be disappointed.

If you're new to Maya, the industry-leading 3D animation and effects software, "Introducing Maya" includes step-by-step tutorials and easy-to-follow explanations to teach you the basics and nuances of this complex software.

Whether you're a student or a hobbyist, you can learn all about the Maya interface and the fundamentals of ... more...