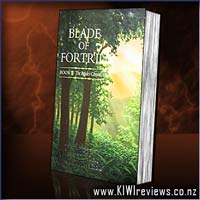 The Kingdom of Fortriu has enjoyed five years of peace since Bridei came to the throne. Now the king is preparing for the long-awaited war that he hopes will see the Gaelic invaders driven from the West forever. The princess Ana, a hostage of Fortriu since childhood, is sent north to make strategic marriage with a chieftan she has never met - and with it gain an ally on whom Bridei's victory relies. Her escort is led by a man she despises: the enigmatic Faolan, Bridei's assassin and spy.

The expedition is ill-fated, and when Ana arrives at the chieftan Alpin's stronghold in the mysterious Briar Wood, she is uneasy. This is a place full of secrets. When Ana discovers a prisoner kept within the bleakest of confinements, she is met with a conspiracy of silence. Faolan, tortured by an impossible love, walks a delicate path between loyalty and betrayal.

Bridei's forces march into battle. But it is revealed to those left behind that their king heads not only towards defeat, but to certain death. There is only one messenger who can reach him in time, but to enlist his services will endanger what has become dearest to Ana's heart...

Having loved the first book in this series, I was very keen to immerse myself in Blade of Fortriu. This time round Marillier focused on Bridei's spy, assassin and friend, Faolan, who is extremely good at his job as he shuts himself away from his feelings and anything else that could distract him from the task at hand, and who has been very evasive about his past before he began working for Bridei. Forced to baby-sit Princess Ana, (the hostage of Fortriu who Tuala grew up with and befriended, and who Faolan considers to be pampered, weak and sheltered), on her journey to her husband-to-be, the assassin starts to show a warmer, kinder side as he and Ana learn there is more to the other than they first thought.
I found this even more enjoyable than The Dark Mirror as it wasn't as heavy on the politics, and the pages simply couldn't be turned fast enough for my liking!! Marillier spins her tales well, mixing a good dose of ancient Britain in with a taste of fantasy to create a series that captures the interest, and even the heart (yes, there's a bit of romance thrown in, but not enough to spoil the story!!). Although the main focus is definitely Ana and Faolan, there is still Bridei's story to continue with, as he and Tuala now experience parenthood, with a few differences considering Tuala's fey blood.
As the book finishes Faolan is a completely different man from who he was at the beginning, and the great mystery of his past is finally revealed, answering a lot of the questions I'd had about him. But as he heads out on yet another mission for Bridei, you're left wondering whether he will keep his promise to Ana and face up to his ghosts so that he can finally put them to rest. All I can say is- roll on book 3!!

If you are looking for a long book to get lost in, this one is fantastic.

Marillier (originally a New Zealand author) has written this wonderful novel which revolves mainly around the adventures of Bridei and Ana. Bridei is King of fortriu and is about to fight a war against Gaelic soldiers. Ana is hostage princess who has grown up in Bridei's court but who has been sent out to form a strategic marriage. Unfortunately, nothing is ever as simple as we hope it will be and these two learn this lesson the hard way.

This book would appeal to a wide range of people as the two main storylines are quite different from each other. Bridei's story follows the progress and strategy of war, while Ana deals with her impending marriage to a monster and her search for something more. The characters are well developed and it is easy to like them and understand their decisions. The author keeps you guessing with the plot until the very end.

There is something in this book for everyone.

There is life everywhere throughout the Milky Way Galaxy. It takes forms that will astonish and frighten, that will challenge and terrify as they exist within the greater fight of existence: eat or be eaten.

But to the crew of the frigate Basalt, those alien life forms that exist in the near vacuum of interplanetary space only serve to be of fascination in the crew's quest for knowledge.