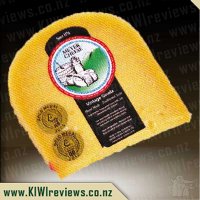 Disclosure StatementFULL DISCLOSURE: A number of units of this product have, at some time, been supplied to KIWIreviews by Meyer Cheese or their agents for the purposes of unbiased, independent reviews. No fee was accepted by KIWIreviews or the reviewers themselves - these are genuine, unpaid consumer reviews.
Available:
selected stores

The name says it all. Crumbly parmesan like texture and a bite like no other, this cheese has what most cheese lovers want a strong full bodied flavour with Bite. After eating it lingers on the palate for quite some time.

Use this one like Parmesan, a little goes a long way, so grate onto your pasta dish or use in that home made pesto!

Vintage Gouda is a key-stone of our range, it contributed to the 2011 cheese maker of the year, 2012 Supreme champion and also it received the cheese of the decade for consistent achievement at the NZ cheese awards.

These are available in 10 kg wheels, 1kg blocks and 150 gram retail units.

Being huge cheese lovers I could not wait to try the Vintage Gouda. We had the crackers ready with various other items to put on them and sliced a few pieces of the Vintage Gouda to try. My first comment is the bag was not that easy to break into so had to use scissors and would of liked it if the bag could self reseal again. My husband left the bag open with the cheese in it and went really hard which is not nice.

I made a Chicken and Shitake Filo for dinner and needed to have 50g of parmesan grated. Had read that you could use this like the parmesan so used this instead. Was not that easy to grate. Not sure if it was because my husband had not covered it up or if that was just the way the cheese is but was really difficult to do. When I finally had enough I found it was great in the meal. It was not over powering so didn't detract from the overall taste and had a pleasant consistency.

Because of the price, I think would buy it again instead of the Parmesan cheese. Has the potential to be used in various dishes that we cook with, but I will definitely wrap it up in the future.

Well the whole family loved this cheese when we had our little nibble of it before I used it for cooking. Miss Seven is becoming a bit of a cheese connoisseur and likes to have her cheeses with crackers "so I can taste the flavour". I wasn't sure that with this being a strong cheese that any of us would like to eat it straight as I was anticipating a cheese like Parmesan. I was very wrong. This is more of a rounder and creamier taste than Parmesan and very edible on its own. Although it has the Parmesan "smell" it is not as pungent and is more melty.

My girls and I had harvested a few kilos of cherry tomatoes from the garden along with a huge bunch of basil and the last of our garlic and we had some pasta on the bench so with the Vintage Gouda cheese I had all I needed for my all time favorite pasta dish.

I grated the cheese into the dish when it was ready and then some into a bowl to scatter on top. I loved how the cheese melted and unlike the Parmesan that I usually use which becomes a bit globular this melted well throughout the dish.

Everyone absolutely loved the meal and it was all eaten up pretty quick with queries as to why I hadn't cooked more. I had only used a small amount of the block we had so there is enough to do a few more meals.

I think this cheese is not only really nice but great value for money as a little goes a long way. I love how natural it is and that really comes through in the taste. I will definitely buy this again instead of the Parmesan that I usually buy as I much prefer this Vintage Gouda and price wise I think that it is really good value for money. I can definitely recommend this as a great addition to your fridge and perfect for cooking and for cheeseboards.

First and foremost I love buying NZ made, and to see that this cheese was in fact a New Zealand product was a big positive in my books. I was told that it was similar to Parmesan when I requested it for review, so was eager to open and try it straight away. I'm quite fond of sneaking small shavings of Parmesan when it's in the house and I'm a huge fan of mainland cheeses vintage cheddar (I craved it all the way through my second pregnancy).

I was not disappointed upon my first taste, a slither cut straight from the block. It was sharp, yet not overpowering - but the smell was not too strong. I was glad of this as my partner and children always complain when dinner smells like 'smelly feet' when strong cheese is involved. I have found myself having little sneaks of if when making other dishes as well - so it must be good! I really liked that it wasn't too crumbly so none was wasted, but the texture was very true to that of a hard, strong cheese.

I have used this cheese in a variety of dishes since opening it and a little seems to go a long way making it good value for money. The first dish I made (pictured) was a sun-dried tomato, chicken and pasta meal with a little of the Vintage Gouda stirred in and some more sprinkled on the top. My 5 year old asked what the 'stink' was in his meal but was happy to mix it in a eat it and there was not a word from my partner about the smell which was nice! The smell did seem to be stronger once it was grated.

I have used this in toasted sammys with ham and tomato, in potato bake mixed with an Edam cheese and the Gouda just sharpened up the whole dish. I have also added to other pasta dishes and into a cheese ball I made to have with crackers. I would definitely purchase again and perhaps add half a block to a ante-pesto platter as I'm sure it would get some great comments.

Overall I would definitely look at buying this again instead of Parmesan, although I would like the option to buy a grated/shaved version to make it quicker and easier in the kitchen - I'm all for convenience!

Of all of the Gouda cheese samples I got, this is the one I was really interested in trying. Aged cheeses are usually stronger in taste, smell, or both. They are also usually harder and drying. Makes sense really, as the ageing process is all about dehydration. So, after being told that this was very similar to a Parmesan in terms of strength and texture, while just a little softer and easier to grate, the first thing that sprang to mind was "Bolognese!"

Using a recently-acquired recipe for a Sicilian sauce, adding some finely diced courgette and a generous dollop of a home-made tomato relish, I added mince, slow-cooked it for about 20 minutes, then added it to some intriguing pasta shapes I found in the back of the pantry - obviously purchased for the kids a while ago. Topping it with a not-at-all-stingy helping of grated Vintage Gouda, I sat down to eat.

While the Bolognese was a little 'quiet' for my tastes, the cheese really lifted it up and gave it that little extra body and flavour that turned it into something really pleasant to eat. The heat of the sauce was enough to rapidly melt the cheese - the photo was taken immediately after I grated the cheese, and by the time I got to the table less than a minute later, it was well on the way to melting.

After dinner was over, I snuck a sliver of the cheese 'as-is' and found it to be every bit as good as I had hoped. While not as sharp or strong as a well-aged parmesan, it none the less had a deep flavour that was at once pleasing and powerful.

Overall, I think this would be an excellent cheese for me to use instead of parmesan in future, as I am sick of the complaints about the smell of my favourite dish, yet received none of them when I sat down with this... in fact even fussy Mr5 asked if he could have some on his meal. That's a pretty radical What-The-Heck moment right there, let me tell you!

Our take on a traditional English smoked cheese which is bold, rich and creamy