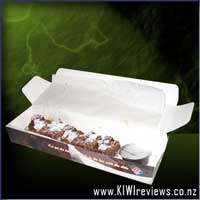 I admit that I am not a huge fan of Domino's pizza, well not from the store local to myself anyway. But the lava cake and the chocolate brownies I have no problem ordering. It can be frustrating buying the pizza from one outlet and then having to go to another outlet for dessert, so more of then not, we make the pizza at home and then nip down to Domino's to pick up the dessert when they have them. After all, it does not take to long for it to be ready and they are literally only 2 blocks from my gate.

I have a love hate relationship with Domino's choc fudge brownie, they are rich decadent, and super yummy...but they are in my mind, given the amount you get, really expensive. And for larger families, if being purchased as dessert, you do need more than the one box. However, given the size and price of the lava cakes, the brownie is probably the better option. I do still think that they need to lower the price or up the quantity or size though.

They come pre-packaged in a little box and also include a chocolate sauce. The sauce is really just a standard choc flavoured sauce. Nothing outstanding or special. I think that if you were to make your own sauce at home that is a little more exciting lol that these would be a whole lot better. Although I mentioned the sizing earlier, I do wish to mention again that for how rich they are the size is appropriate, its just not appropriate given the pricing. As this is a treat dessert though and not something you would be buying regularly the price can be forgiven.

These are a really good tasting desert, and compliment pizza well. Usually I'm a bit cautious when it comes to chocolate or super sweet food because of my sensitive teeth, but these were no problem for me. They also are a perfect size, where you dont end up feeling sick, but feel satisfied after 1 piece. The dipping sauce really makes a difference, it doesnt overpower the taste of the fudge, a must have.
If you couldn't finish them all in one sitting they would make for a tasty treat kept in the biscuit bin for later on too.

To be completely honest these are nice, but I can take them or leave them. As far as chocolate fudge brownies go they're good, but they didn't make my mouth melt. Don't get me wrong, I'd happily munch away on them again. They're great for that chocolate fix, and I do think the chocolate dipping sauce adds to their overall value. But I can't say they top my list in chocolate love.

The price was quite good though, considering what you can end up paying for such treats, so I'd say they're good value for money.

Small pieces of chocolicious heaven!!! I'm not a big chocolate fan, but they looked good, so I thought I'd give them a try. That first mouthful- oooooooh!!!!! It just melted away into my mouth, leaving me craving another bite, and another, and another, and- well, I think you get the picture!!! A box of five was NOT enough for this VERY small time chocolate lover, but a box of 10 was just on the borderline of too much chocolatey goodness. The chocolate sauce included with it wasn't too bad, but I found these bite-sized morsels far more enjoyable on their own. From now on (well, until Dominos removes them from their menu at least- *growls at the very thought*), a box of the choc fudge brownies will be a permanent part of any orders I make from Dominos!

Decadent in it's richness, delightful in it's texture, delicious with the supplied chocolate, or absolutely sinful with a gourmet chocolate dipping sauce. These were a real treat and an awesome way to end a night of pizza, cheesy garlic bread, and boardgames.

When I opened the box, I thought they had forgotten half of them, they were, quite literally, bite-sized... however, after eating my first one and tasting it's thick richness, I decided they had the right sized portions... as a dessert treat, 2-3 of these would be enough for most people... thankfully, we had enough people around to deal with the 2 boxes we ordered.

The chocolate dip that comes with them is nothing special, but compliments them very well, however if you have a pottle of something a little more decadent sitting in your pantry or fridge, these gain a whole new dimension of Yum.

Overall, a wonderful addition to the Domino's menu, even if it is for just a limited time... more's the pity.

Open early 'til late, we serve fine food and beverages, both hot and cold.

You will find us at the Main Street end of the Downtown Mall, next to Copy King and opposite Native Soup.

Come and see us. Bookings not always essential.