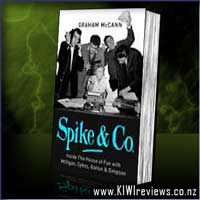 Disclosure StatementFULL DISCLOSURE: A number of units of this product have, at some time, been supplied to KIWIreviews by Hachette or their agents for the purposes of unbiased, independent reviews. No fee was accepted by KIWIreviews or the reviewers themselves - these are genuine, unpaid consumer reviews.
Available:
November 2006

On any weekday morning, if you clambered over the crates of fruit and veg, climbed the five flights up the rickety staircase and entered Associated London Scripts, you would find Spike Milligan, Eric Sykes, Ray Galton and Alan Simpson, shaping the latest shows, swapping the odd story and searching for another funny line.

Spike & Co takes us on an enthralling journey inside their house of fun, moving from the bright optimism of the early 1950s, to the comedies and crises of the 1960s.

Together, this eclectic bunch were responsible for a golden age in British comedy, which included The Goons, Hancock's Half Hour, Sykes, Steptoe and Son, The Frankie Howerd Show, Round the Horne, That Was The Week That Was and Till Death Us Do Part.

Spike & Co takes the reader into the inside world of Spike Milligan and the other group of writers that made up Associated London Scripts - and it was that company that came to dominate British radio and television in the years after the war right until the late 1960. This age, and rightly so, is often referred to as the "Golden Age" of British television for producing a range of comedies (and dramas too) that came to dominate television and radio with scripts of such a high calibre (and I can almost hear Galton and Simpson (with Hancock) in their pronunciation of that word) that these scripts are still spoken about with fondness today.

Goon show? Sykes? Hancock's Half Hour? Steptoe and Son? All from the offices of Associated London Scripts - and a useful appendix lists the shows that were written by this group of comedians and writers. Some of these have been re-filmed reletively recently by other comedians (Paul Merton jumps to mind) and the scripts are still as funny today as they were when they were written.

I mention Galton and Simpson; they were part of Associated London Scripts, as was Johnny Speight, Terry Nation and John Antrobus.

Spike & Co traces the history of Associated London Scripts through the early days that led to its formation, through to some of the key writers that made up this merry band with brief biographies for each and some of the major shows that were produced by this office. This makes for an informative book, with plenty of chuckles on the way, more so when one reads through sections of scripts (and such was the way they were written, I can almost hear the actors' voices echoing through the pages).

If you want a present for the English comedy fan in your life, consider buying this book. McCann has brought to new ears some of the fantastic comedies of years gone, and I hope that with this book comes a renewed interest in these great men.

We're off to find a kiwi!
We mustn't make a noise.
The kiwi bird, I'm sure you've heard,
is shy of girls and boys.

Where, oh where can that kiwi be? Join the children in their great kiwi hunt, and make new friends along the way!