« The Book of General Ignorance review 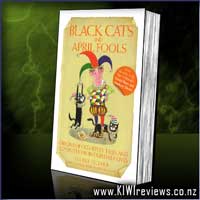 Disclosure StatementFULL DISCLOSURE: A number of units of this product have, at some time, been supplied to KIWIreviews by the company for the purposes of unbiased, independent reviews. No fee was accepted by KIWIreviews or the reviewers themselves - these are genuine, unpaid consumer reviews.
Available:
Available Now in All Good Bookstores.

Many of us play pranks and jokes on each other on the 1st April each year, but why? The idea came to Britain from France after 1 January was chosen by the French to replace 25 March as the first day of the year. Before this, it was customary for folks to give each other presents to celebrate the first day of the new year. The problem was that the old date of 25 March very often fell during holy week and, accordingly, the church insisted that the good times were put on hold until the first of April. Once the new year had been moved back to 1 January, it became common for French people to pay visits to their friends on 1 April to try and fool them into believing it was the first day of the new year. Of course those who fell for it really were fools, and the custom for making idiots out of unsuspecting or witless victims grew from this.

Carrots do contain vitamin A, which helps to maintain healthy vision, but they do not contain enough to make any significant difference. This tale started in the Second World War when the British spread a rumour that their plane spotters were eating carrots to give them improved vision, concealing the truth about the invention of radar.

I guess all of us have our superstitions that we hang onto, but few of us know, or have really thought, from where that superstition may have originated.
Oliver's book gives a lively account of the superstition and the history behind that superstition so one can clearly see the origin and sometimes the logic (if you can call it that) behind that superstition.
Clearly laid out in a number of chapters each relating to a different subject - from food to marriage, from birth to death it is easy for the reader to find the relevant chapter and explore the wise words therein, including variations of a theme from around the country and sometimes, other parts of the world.
In flowing narrative, fond descriptions and entertaining cartoons, the reader will become well-versed in the art of superstition.
Touch wood, this book will become a best-seller.

When my teacher Mr Fullerman doesn't have his BEADY EYES on me, I like to draw pictures and write stories about stuff, like when we had the worst holiday ever and when my parents came to school for parents' evening. All I want to do is get tickets to see the best band ever - DUDE3 - when they come to town.