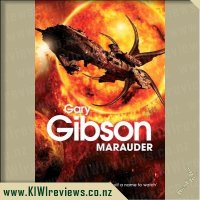 Disclosure StatementFULL DISCLOSURE: A number of units of this product have, at some time, been supplied to KIWIreviews by Macmillan Publishers Ltd or their agents for the purposes of unbiased, independent reviews. No fee was accepted by KIWIreviews or the reviewers themselves - these are genuine, unpaid consumer reviews.
Available:
July 2014

When Megan finds Bash, he's being held captive by Gregor Tarrant. Tarrant wants Megan dead - but not before he finds the entity himself, for his own dark goals. Megan is desperate to reach the Marauder first, but the price for unlocking its secrets may be too high. Megan should know, as she still bears the scars from their last encounter ...

When I read the first book in this series - Stealing Light - almost eight years ago, I wasn't a huge fan. To be honest, it struck me as way too chaotic, and even the aliens and super-tech elements weren't enough to hold me. So, when this title turned up I had one of my rare "Oh dear lord, save me!" moments. I am so glad I didn't pass the book on to another reviewer, because this one totally turned my opinion of Gibson around.

While still a longer and more drawn out plot than I prefer, this was indeed a story that captured my attention and held it. I was really taken by the "character" of The Marauder more because of what was revealed about its motives as the later stages of the story developed. The capabilities it displayed near the end of the story have wishing the author goes back on his stated plan to keep this as a stand-alone tale and writes a sequel so I can see how it fared against an inferior, but far more dynamic, opponent - a human mind.

I also loved the interesting twist when it came to revealing the eventual fate of the main character from the earlier book, Dakota Merrick. I admit I didn't see it coming, but I have to wonder if it was something covered in titles between the one I read previous and this. None the less, great twist indeed.

Overall, far from being my favourite sci-fi novel published this year, it is a good tale and worth reading for sure. Fans of the genre probably won't be disappointed, and devotees of Gibson's works will undoubtedly find it to be one of his best. Personally, I'm looking forward to reading more set in this universe, but I'm not sure I would go out and buy future titles, more likely wait for the local library to get a copy in and read it that way first.

The trick with found things though, is how easily they can be lost. Friends can betray. Mothers can disappear. Visions can mislead. Certainties can unravel.