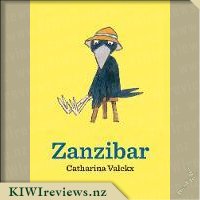 An uplifting, warmhearted early chapter book about a crow, who proves you can move mountains (or even dromedaries) and perform truly heroic deeds if you believe in yourself Zanzibar cooks a fine mushroom omelette,and he is a crow who wears his feathers well. At least he thought so, until a spectacled lizard knocks at his door, wanting to write an article about a remarkable person. Is Zanzibar remarkable? The lizard seems to doubt it. Zanzibar thinks: To be remarkable, I must achieve something incredible, an extraordinary feat. So he decides that's what he'll do. His feat will be an attempt to lift a dromedary.

Zanzibar follows Crow, who after being told he hasn't done anything exceptional enough to end up in the newspaper, decides to go and see if he can lift a small, nice and slim, dromedary with just one wing. Now, none of the characters have any depth to them, we don't get any history of any of them and whilst we do get other characters, it is really all about Crow. Crow is a very two-dimensional character who didn't have me caring either way if he managed to achieve his goal or end up content, part of that may have just been lost in translation (this was originally published in French).

This will be an easy read for those who aren't fab readers yet but engaging enough that younger kids will be able to sit there and listen to it being read to them. Whilst I didn't love this book, I did laugh out loud at a couple of moments such as - "No," said the mailman, "I knocked just to tell you there's nothing for you today." and a couple of other small moments. I don't think this book is anything amazing and certainly not award winning story telling, but it was a nice little way to while away a few minutes (for me) and I'm sure there are plenty of children who will enjoy following Zanzibar as he attempts to do something extraordinary.