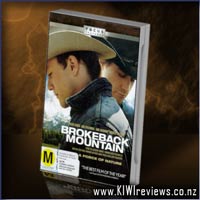 Brokeback Mountain is a sweeping epic that explores the lives of two young men, a ranch hand and a rodeo cowboy, who meet in the summer of 1963 and unexpectedly forge a lifelong connection.

The complications, joys and heartbreak they experience provide a testament to the endurance and power of love.

Brokeback mountain is a film that, to be honest, not a lot of guys would have seen, due to the story it portrays, and I have to admit that I didn't go out of my way to see it, but my neighbour had a bunch of movies to watch, and I was invited to see them, this was one of them.

If you are comfortable in your own skin, what is the problem with the story it tells?

It has a great cast of people, with some really good acting, something that you don't see everyday with a lot of films that are churned out year after year.

One thing I did learn about this film, is that there is a quite a bit of visual special effects used, in the scenes with the sheep herding, there is actually only about 20 of them, the rest are put in by computer afterwards.

This review wont sway you to watch the movie if you don't want to see it, but don't let people's small minds, and crazy comments make you miss out on a great film, with solid acting throughout.

Challanging and confrontational was how Brokeback Mountain was described to me. I was also told it would push boundries, push my comfort level and generally make me feel uncomfortable.

It certainly was challanging and confronting in it's subject. Brokeback Mountain tells of an unconventional love story between two men and follows their lives down the years. It was truly an epic that would undoubtedly push the buttons of the homophobic, and open eyes of people who have never considered that a powerful love between two men can exist.

Yet this love story is set in rural Wyoming, a setting not noted for its tolerence to homosexuality, amongst a group where they are the man's man. Cool, rugged, hard working, hard living and everything that a stereotypical man should be - everything except gay.

The rural Wyoming countryside plays a stunning backdrop to Brokeback mountain. The setting and casting is every bit as elegant as the story itself.

Heath Ledger and Jake Gyllenhaal proved someexceptionally emotionally charged deliveries and are entirely believable in their roles as Ennis and Jack. The story was not simply played, but lived. The two actors bared their souls in this production. They were ably supported by Anne Hathaway and Michelle Williams, with an exceptional delivery from Randy Quaid.

The superb cinematography, acting and editing was the end result of Ang Lee's vision and his skills as a film maker from the screenplay excellently adapted by Ossana and McMurtry from a short story by Annie Proulx which first appeared in the New Yorker.

Brokeback Mountain was the most talked out film of the year when it hit the big screens, and walked away with three highly deserved Academy Awards. Now released on DVD, it is set to put its clear but simple story onto the small screens to challange a new group of audiences.

The author of Gone Girl takes you on another dark and deadly journey to the epicentre of fear and the far corners of sanity.

Libby Day (Charlize Theron) thought she had left her childhood nightmare behind in her small, squalid hometown. New forces beyond her have re-opened the one chapter of her life she never wanted to face again.

The sole survivor and only witness ... more...