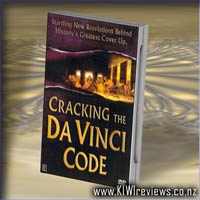 Host and author of the international best-seller Cracking the Da Vinci Code, Simon Cox, takes you on an in-depth journey through the heart of the mysteries behind Dan Brown's best-selling novel, The Da Vinci Code.

This comprehensive documentary cuts through the confusion, ultimately cracking Da Vinci's code and revealing the remarkable truth behind the legend of the Holy Grail.

First off, after the STUNNING impact from Dan Brown's book, I was expecting something smooth, professional, and engaging from this doco. BOY WAS I WRONG!

This was an obvious 'slapped together' presentation, akin to a B-grade thriller or one of those corny underground movies like Pamela & Tommy Lee's Home Movie. Utter crap.

I was impressed by the content, and by some of the expert testimony, but the sound quality varied wildly from 'too close and too loud for the mic' to 'obviously a camcorder on the desk', the video quality in place was so horrible I couldn't see the fine details they were talking about.

On top of that you can add Lynn Picknett, a nutty chick dressed in black, co-author of "The Templar Revelation". The book was mentioned, by name, in Dan's book, and she's all bitter about it! Full of stupid, unprofessional comments such as "...Dan Brown, she mutters through clenched teeth...", this just shows the pettiness of her so-called professional standards. Grow up woman! Her co-author, Clive Prince, however, appears to be a much more balanced individual, and although he expresses some distrust of Dan's interpretations, spends his time discussing the issues at hand, instead of shit-flinging.

The cut-aways to pertinent scenes and images throught the various interviews is poorly done, and made to (or accidentally) look like a slide-projector cutting in and out of a film! This bring visual and audio jars to the presentation, making it rapidly annoying in some image-intensive places. Combine that with the overall low standard of production, this is possibly the WORST doco I have ever had the misfortune to take an interest in.

Overall, the content is interesting, but only if you can claw your way through the "beginner's play-date with new toys" feel of the whole thing. A sad addition to the collection, and only there because of it's tie in with a brilliant book, which I loved despite it's 'artistic licence' with some historical facts.

Score: 9.8
Product reviews for listing 8274: The Kid Who Would Be King -  Directed by Joe Cornish

A band of kids embark on an epic quest to thwart a medieval menace. Old school magic meets the modern world in this epic adventure. Alex (Louis Ashbourne Serkis) thinks he's just another nobody, until he stumbles upon the mythical sword in the stone, Excalibur.

Now, he must unite his friends and enemies into a band of knights and, together with the legendary wizard Merlin (Sir Patrick Stewart), take on the wicked enchantress Morgana (Rebecca Ferguson). With the future at stake, Alex must become the great leader he never dreamed he could be.