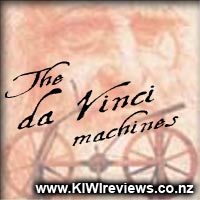 Price:
See info to the right
Sample/s Supplied by:

Disclosure StatementFULL DISCLOSURE: A number of units of this product have, at some time, been supplied to KIWIreviews by the company for the purposes of unbiased, independent reviews. No fee was accepted by KIWIreviews or the reviewers themselves - these are genuine, unpaid consumer reviews.
Available:
18 Nov to 5 Mar 2006

Auckland Museum in association with Beca is proud to present this significant international exhibition displaying 50 models of Leonardo da Vinci's famous machines, each constructed by Florentine artisans and based on Leonardo's famous codices.

To satisfy the world wide interest in Leonardo da Vinci and his creative process, the Florentine artisans of the Niccolai family from Teknoart have spent the last half century studying the mechanics of his projects, and have created an outstanding international exhibition of fully-functional models (some are interactive) of Leonardo's inventions - including machines from newly discovered codices that have not been previously displayed in museums.

The exhibition is comprised of 50 models and is organised around four themes; mechanical, military, hydraulic and flying machines. Each model has been built according to Leonardo's drawings, notes and with materials available in 15th century Italy. The models are accompanied by a facsimile of the relevant drawing with Leonardo's notes and an explanatory text.

Only recently have I had much knowledge or interest in things to do with Leonardo da Vinci. I admit to having had only a superficial knowledge of the work that he had done, and the things he had achieved. I had seen copies of his most famous works but his drawings of inventions and ideas on battle stuff... I had no idea about.

So, it was with great anticipation I went with a friend to see this exhibit and witness for myself what other people saw in the things he had done. I was amazed at the attention to detail the reproduced sketches and schematics showed. He really was a man ahead of his time, as a number of people pointed out to me. The number of models on display showed everything from the first version of the modern day tank to the invention of the differential gearbox. There was a lot of information and sketches on the walls for the exhibits that were not for use by the public and just as much for the ones we could touch. I did not opt to see the video, but from the little I heard it sounded well presented and researched.

I learned a great deal about the man, his thoughts and in some ways what drove him to design the things he did. The exhibition was well set out and easy to follow. If you have kids, I am sure they would be fascinated to learn how many of the things they take for granted in their lives came about.

In all, a very informative and, dare I say it, educational day out for the whole family. If you get the chance, go see it.

Having been a fan of all things linked, even tenuously or fictitiously, to Leonardo da Vinci, I was overjoyed at the chance to head up to Auckland to see this exhibition while it pauses in it's global tour. I was expecting a lot of posters with his drawings, a few books, and some rigid models sealed away in perspex cases... I wasn't expecting the wonderous display that greeted me as I stepped into the display hall. Walls with concise, informative explainations and anecdotes on them... models everywhere, many of which you could interact with and see for yourself how they worked, and the principles behind them, a movie theatre with plenty of seating, on a non-stop loop all about Leonardo, and yes, the posters with his drawings were there too.

Some of the models that had been built displayed properties we take for granted these days, such as the rear differential assembly for a motorvehicle, a vertical drilling rig (which has evolved into such things ranging from a drill press, to an oil drilling platform), gearing systems that convert rotational or circular motion into lateral (straight line) motion... and of course the other way around too... which gave rise to devices ranging from sewing machines to steam engines... his studies of human anatomy were way ahead of their time, leading him to great insights regarding the possibility of human-powered machines that could potentially fly... his thoughts on engineering and engines of war led to him designing the first tank, a ship with a huge bladed axe that could destroy enemy naval vessels while being immune to the assualt of it's adversaries, mortars that could destroy entire buildings, multi-barreled cannon that could wipe out a battalion without needing constant reloading...

OK, so some of his ideas were turned to bad deeds, but the point is that this man developed, if not the devices themselves, then at leat the conceptual basis for much of our modern life... and did it hundreds of years ago. He designed bridges that were assembled from readily-available materials that could be carried easily, and had the strength to support far more than their components would lead you to assume (my favourite is the arched bridge that is simply made from 15 logs with 3 notches cut in each, yet is strong enough to support a small modern vehicle. No nails, no ropes, no bindings, clip it together and you're set!)

Leonardo also had a fascination with water, believing it to be the element that controlled the universe. His studies of hydrodynamic flows enabled him to devise machines that could be powered by water more efficiently than any machines currently in use in that period, he also designed a breathing device that allowed a person to dive and stay submerged for as long as they wished. Though his was not the first, it was so far advanced, it's efficiency rivals some of the modern scuba gear. One of his least famous, but most adorable inventions was the Water Shoes... two small canoe-shaped blocks of wood with leather covers which strapped on to the feet, and two poles, each with a cork float on the bottom ends that allowed a person to literally walk on water. Versions built with modern materials have successfully allowed a person to 'walk' across some substantial bodies of water. He also developed the Waterbouy...which in modern days we would call a 'floatee ring' or air-filled donut-shaped device made of leather.

Overall, this is a stunning exhibition, and if you have even the smallest spark of scientific curiosity in you, it will fan into flames and burn bright as you wander around, playing with the pulley systems, the automated foundery hammer, the precursor to the automatic gearbox, and all the other wonders that were invented centuries before you and I were born. If you only go and see one major exhibition this year, make sure this is the one. The Auckland Museum also has some other great exhibits, some seasonal and some permanent, so it will be a full day for anyone with even a shred of wonder in their soul.