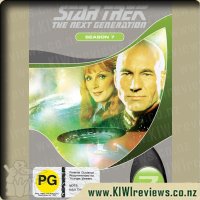 It's Star Trek, but not as we know it! STAR TREK THE NEXT GENERATION on DVD and with completely NEW packaging.

The Revelation of the Pyramids
Rating: 9.8

Phew, what a run it has been and the final season is no exception and boy oh boy does it go out with a bang!

If you've been with us for the last six seasons then it is a given that you should watch the final season of The Next Generation, if not, then head back to episode one, season one folks. Season seven kicks off with the conclusion of Descent, is Data evil now or will he retain his goodness? The final episodes, a great two parter, really ends the series well, switching Picard between his younger self (just before he was to go to Farpoint Station - very first episode), Picard of the present and Picard of the future (living on Earth, retired). It's his final test from Q and he must save the universe, sounds corny but really well done since it brings back Tasha Yar and shows us what might lie in our favourite crews future.

As with any TV show there's always going to be one or two episodes that aren't enjoyed, for me it is Klingon centric episodes as I'm just not that into the Kilngons background, but always love the line "Today is a good day to die". It's a rather sad goodbye though, if you have been there from the start, and they did round of the series wonderfully. I am glad to be able to watch this series on DVD and the extras on the DVD giving us memories from the cast and crew makes for a lovely finish to a great show.

On January 10, 2016, the world lost a great music legend, David Bowie. The legacy he left his New Zealand fans is a superb catalogue of music from a stellar 40+ year career and the memories of his many visits to these shores for concerts that have gone down in folklore as some of the biggest ever staged on Kiwi soil.

In an authentic celebration and salute to David Bowie, aka Ziggy Stardust and the Thin White Duke, Showcase ... more...