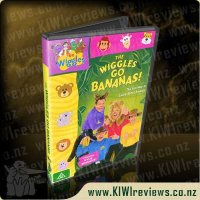 In their latest adventure, The Wiggles Go Bananas! The fab four of fun have recorded some of their catchiest and most infectious songs to date. We jump into the heart of the groovy animal kingdom with songs such as Monkey Man, Kangaroo Jumping, Tasmanian Devil and Tiger Man. Along with Australia's John Waters (singing Rusty the Cowboy) and Ireland's Morgan Crowley singing The Unicorn. So jump into the jivin jungle with the kings of pre-school swing, as The Wiggles Go Bananas

My girls (4.5 and 3 years) love The Wiggles and they are very popular with my 18 month nephew too. Go Bananas is no exception. It is nice to know that we are supporting UNICEF with Monkey Man (featuring Kylie Minogue). I personally didn't like that song and thought it would have been great for Kylie to do the Locomotion with The Wiggles instead.

Our family favourites on this DVD are "I'm a Scary Tiger" and "Tassie Devil" which we often sing together (started by Mummy and Daddy). These singalongs have resulted in some lovely family moments where we are all tigers of Tasmanian Devils running around the house trying to scare each other.

The other songs on the DVD are a mix of mellow, nursery rhymes and rock and roll songs. It is one that we are happy to watch with the children and although the songs get stuck in your head it isn't too irritating.

My daughter is so into animals and the Wiggles so when we saw this DVD in the store a while back, we leapt at the chance to buy it. Its another Wiggles DVD with Sam Moran in the Yellow. I think what I like the most about Sam is, he is closer to my age. Plus he is a great singer, and not too bad looking (come on Mums, you are with me right?)

We actually went to the Wiggles Go Bananas concert when they were here, but we owned the DVD first. It was good to be able to listen to all the songs and get a feel for them before they performed them on stage. On the DVD you have 25 tracks. My daughter's favourites were Monkey Man which is performed with Kylie Minogue. Its a catchy song, but I don't feel like Minogue really added much to it by featuring in it. I guess she's a draw for some parents though. However, my daughter had no idea who she was. She also liked "I'm a Scary Tiger" and I must admit that it is very catchy!

There are quite a few Australian themed songs, about koalas and kangaroos, even a Tazzie Devil song. It makes sense since they are an Australian band, but it would have been cool to have more songs about exotic animals. The special features are excellent. The safety around dogs segment was my favourite, because it is so important. We watched it and it started a conversation about how to treat animals with respect. There are also bonus episodes of Wiggle and Learn and Dorothy the Dinosaur.

There is nothing wrong with your television. Do not attempt to adjust the picture.

The complete first season of The Outer Limits, the critically acclaimed and most original science fiction series, is finally available on DVD. Like the classic 60's series of the same name, this modern adaptation is an imaginative exploration of humanity's greatest hopes, and fears.