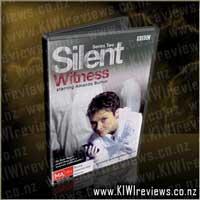 Sam's ordered life is shocked by the arrival of Detective Superintendent Peter Ross. He is handsome, intelligent, ambitious - and an ex-lover. Peter and Sam fell out 12 years ago after Sam's evidence at a trial lost an important case - or so Ross believes. Has he forgiven her? Has She forgiven him? And more importantly, can they now work together?

Blood, Sweat and Tears:
When an apparently fit and healthy young boxer dies in the ring. Sam's discovery that he has old injuries to his brain moves the investigation to his trainer and his gym.

Cease Upon The Midnight:
Sam's postmortem on the body of Stuart Evans reveals a suspicious needle track in his foot. But who would kill a man in the final stages of a terminal illness?

Only The Lonely:
Sam is called to the scene of a woman found strangled with her own tights. Ross believes that it is connected to an unsolved case, but Sam is not so sure.

Friends Like These:
Sam's investigation of an old woman beaten to death while walking her dogs, drives a wedge between her and Ross. The police are convinced they have their man, but Sam's personal findings lead her elsewhere....

Silent Witness has always intrigued me and this second series is no different. In this series there are a few changes. Firstly Sam and Wyn's mother has now passed away, also Detective Superintendent Farmer has left, Sam has a new love interest and Trevor's wife has left him.
This series has 4 different storylines, from a pro boxer, to aids victims to teenage boys committing murder and a young girl who couldn't be abandoned by the one whom she saw as her lifeline to the world.

Episode 1: Blood, Sweat and Tears:
This episode is where a boxer is killed in the boxing ring. All seems perfectly legitimate until Dr Sam Ryan uncovers the fact the boxer went into the ring with old injuries. The investigation moves towards the gym and trainer. As the gym owner was seriously injured in a hit and run incident, and his daughter who took over the gym for him was also murdered to make it look like a suicide the investigation then turns towards the boxing promoter as the perpetrator. This episode also sees Detective Peter Ross come on to the scene. There is tension between Sam and Peter as they were lovers 12 years ago until they fell out over a high profile case in which Peter said that Sam's evidence lost him the case.

Episode 2: Cease Upon the Midnight:
When Sam discovers a needle track in the foot of an Aid's patients body she passes the case over for the police to investigate.

Stuart is a 40 yr old man with Aids. He throws a big party for himself as he has decided he has had enough and doesn't want to suffer anymore.
Mark and Craig are brothers and are friends with Danny. Mark and Danny also have Aids. The two brothers do not get along very well but they both get on well with Danny.

Peter and Sam's bond grows stronger. Wyn is relishing the freedom of not having the burden of looking after their elderly mother, and eventually she starts up a fond relationship with Trevor whose wife has left him for a younger man.

In the end the police decide to exhume Mark's body to see if there was also a needle track in his foot, which there was.

Stuart and Mark both left messages for after they were gone which explained it wasn't murder but assisted euthanasia (even though it is illegal in Britain). In Marks message to his family his brother finds out who assisted Mark, and flies off the handle and kills him.

Episode 3: Only the Lonely:
Mr Matthews is a middle aged man with an aircraft company and a young and beautiful wife. His life is turned upside down when he finds out she is planning to leave him for one of the pilots and move to Canada.

Detective Peter Ross is sure that the woman that was killed is linked to an old case with the same M.O., However Sam believe's it is a crime of passion.

One of the office girls, Caroline, at the aircraft hanger, looked up to Alan as a kind father figure, and possibly more, but when she found out about his and affair with her boss' wife she got into a rage and got rid of her problem (the woman who was taking Caroline's man away from her.) However this didn't help Caroline one bit as Alan still went to Canada, and refused to take her with him.

Episode 4: Friends Like These:
This episode has Wyn enjoying a new house and job. Trevor and Wyn realise that they should only be friends.

An elderly lady is attacked and killed whilst taking her dogs for a walk.
Also there is a man, Palmer; who is talking to a young boy, Lyndon; in the park and offers him a puppy.

Meanwhile there are two teenagers, Ben and Kevin; who are victimising the town and especially Lyndon.

The Police interrogate Palmer for the death of the elderly lady as he is found with her watch.

Lyndon, the boy whom Kevin and Ben bully a lot, finally has enough and commits suicide.

After being at the crime scene and witnessing the two boys picking on another boy, Sam notices two boys fooling around and acting out how the woman died. She crosses the line and talks to the two boys about what was going on. The Police, whom are convinced that Palmer is the killer, are mortified when Sam gets a confession from the boys about what happened. This causes Detective Superintendent Peter Ross to lay a formal complaint against Dr Sam Ryan.

The two boys are convicted of murder.

The series ends with Sam being investigated but it leaves an open ending as to what is going to happen next, so i guess we have to watch series 3 to find out!

All in all it was a great blast from the past to re watch, and will definitely be watching it again.

But wait, there's more! Extras include extended versions of the ... more...