« Doctor Who - The Mutants review 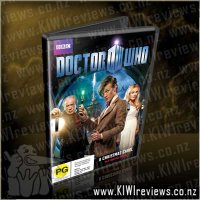 The eleventh Doctor (Matt Smith) returns with his companion Amy Pond (Karen Gillan) and her new husband Rory Williams (Arthur Darvill) in a clever twist on the much loved A Christmas Carol.

In the grand tradition of Doctor Who Christmas Specials, A Christmas Carol brings to the table a stellar guest star line-up including veteran actor Michael Gambon and opera diva Katherine Jenkins, in her first acting role.

It's the deepest part of winter, the exact midpoint, Christmas Eve - half way out of the dark. Amy and Rory are trapped on a stricken space liner that's plummeting through banks of thick icy fog to the surface of the planet below. Only one man has the power to save them; only one man is in possession of a machine that can clear the fog and let them land safely. That man is Kazran Sardick, a rich but lonely old miser who rules Sardicktown with a sky-mast of iron...Can the Doctor put a song in Kazran's heart in time for Christmas? Can he bring him out of the dark?

About the series, lead writer and executive producer, Steven Moffat, commented: "Oh, we're going for broke with this one. It's all your favourite Christmas movies at once, in an hour, with monsters and the Doctor and a honeymoon and - oh, you'll see. I've honestly never been so excited about writing anything!"

Taking the basics of Charles Dickensâ ™ A Christmas Carol, Steven Moffat skilfully wove the tale into a intriguing and layered Doctor Who story.

It starts off with some action, a spaceship falling from the skies, yet it wasnâ ™t long before Moffat slowed the pace right down. We are transported into a Dickensian world, where we are then introduced to the Scrooge of the piece, played by Michael Gambon. Only here, Scrooge goes by the name of Kazran Sardick. And he's more complicated than the average miser. He has the ability to save those in the falling spaceship, yet chooses not to, and thus comes the doctor and his use of time travel to try and convince our 'scrooge' to save their lives.

Katherine Jenkins is no slouch, either. She plays a pivotal role here, and avoids the fear of stunt casting in the process. Thinking back, she doesnâ ™t actually get a great deal of screen time, yet her slow demise, and Sardickâ ™s torment over which day should be her last, is wonderfully done.

Just as one can expect from the doctor, there were fantastic creatures (the flying fish), action, and plenty of laughs. This was a great Christmas special and had me eagerly waiting for the next years special.

This is the first Christmas Special to feature the new Doctor and also to be written by the new man in charge Steven Moffat, so there really was a lot riding on this one as it had a rather grand tradition to live up to, and did it what!

Steven Moffat has taken a very traditional Christmas tale and given it a very Doctor Who makeover. The story starts just after the ending of the last series and while it does have appearances by Amy Pond (Karen Gillam) and Rory Williams (Arthur Darvill) it is more a Doctor Who story, almost like Voyage of the Damned where is it mainly The Doctor and his guest stars. In this case we have the wonderful Michael Gambon (famous for the Harry Potter movies, and for almost crashing on the Top Gear test track and having a corner named after him), and the lovely Katherine Jenkins (who has never acted before, but does a passable job).

Like the traditional A Christmas Carol story this show features a crotchety old man Kazran Sardick (Michael Gambon) who, like Ebenezer Scrooge, does not believe in Christmas or it's meaning, and it's up to the ghosts of Christmas past, present and future - or in this case The Doctor - to help change the man so that all ends well and happily ever after (well almost anyway). This could have been a very cheesy and badly done episode, but with a master like Steven Moffat at the helm the odds of that happening were really very slim.

However with that being said I still honestly wasn't sure if I would actually like this story, but it was a genuinely good story and worthy of carrying the Doctor Who name, it was well written and still had all the action and humour I have come to expect from Doctor Who.

Of course we also have the Doctor Who Confidential which goes behind the making of the show, and is always a great watch as well.

I am now eagerly awaiting the return of Doctor Who in season 6 later this year, and I can't wait to see what is in store for us.

Come and sing and dance with the Fairies, with their first ever Fairies DVD box set!

The Fairies music clips DVD's from Fairyland Songs V1 and V2 are extremely entertaining for children who love to sing and dance.

Fairyland Songs V1.
When Harmony and Rhapsody discover tiny ballet slippers, they remember childhood days of fairy ballet, and decide to spend the whole day dancing with their friends. From ... more...