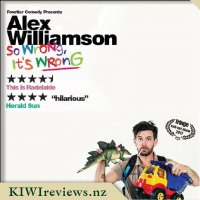 Someone say drugs, pedos & terrorists? Probably not. These are just some of the topical/fun themes touched upon in this one-hour honesty session. Alex's twisted outlook will shake your faith in humanity before restoring it ever so slightly, then smashing it once again beyond repair. But hey, at least it's entertaining.

It's important to describe my sense of humour before I get into my review; as a cynical, pessimistic person, I love shock value comedy, where the taboo subjects are discussed and joked about (not in a "we advocate for the topic" manner, but a "we are mature enough to be able to joke about such a questionable topic without defending or supporting the specified topic"). So it goes without saying that when I went to the comedy festival website (www.comedyfestival.co.nz) I didn't search for a comedian, a show on a specific date or at a specific venue. I went straight to the topic filter, and I scrolled straight to "Controversial/Dark".

First show on that filtered list, was Alex Williamson. The man is an Australian, in fact, those were the first words he uttered when he got up on stage, and in true Australian comedic fashion, within seconds the audience was subjected to it's first "c*nt!". By the end of his hour, it is safe to say that "c*nt" was uttered a further 70 times minimum. If that kind of language is likely to offend you, then this show is not for you. In fact, when you search for information on Alex Williamson's show online, you will find that all website listings actually have a censored version of the blurb, omitting two sentences from the official synopsis. Those missing lines state If you're not an 85-year-old church-goer, there'll be something in this show for you. But by all means come along if you are an 85-year-old church-goer, just flick your hearing aid off and laugh along in a haze of dementia . Again if that offends you, this show is not for you.

Williamson's standup is composed of very short multi-joke stories on a wide range of unrelated topics. Expected topics include paedophiles, kinks, public sex and masturbation, rape, and a lot of drug-related anecdotes. Whether it is ranking ball-tampering worse than having sex with minors or comparing Stephen Hawking taking drugs to feeding a dog a worming tablet, Williamson combines pop culture references with current events, and unspeakable atrocities to create a series of off-colour jokes that are guaranteed to appeal to many. He combines regular stand-up with a couple comedic songs, but while his story-telling pace is reasonably fast (even with the similar accent, you do have to be constantly actively listening to keep up), his songs are slow and methodical. The man has no qualms at telling hecklers to "shut the f*ck up!" and knows his audience, taking less than a couple of minutes before the entire crowd was roaring with laughter due to a joke at the expense of the Auckland transport system.

While controversial and dark humour, it was definitely a show that mostly focused on sex with the young, and drugs, whereas I empathise more with the humour aimed at alcoholism and self-degradation, which was non-existent in Williamson's show. I definitely got several laughs out of it, but it didn't engage me as much as I would have liked. Still, great value for $35.