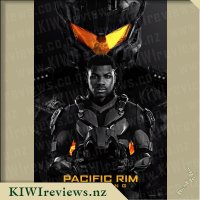 Jake Pentecost is a once-promising Jaeger pilot whose legendary father gave his life to secure humanity's victory against the monstrous Kaiju. Jake has since abandoned his training only to become caught up in a criminal underworld.

But when an even more unstoppable threat is unleashed to tear through cities and bring the world to its knees, Jake is given one last chance by his estranged sister, Mako Mori, to live up to his father's legacy.

Pacific Rim first introduced us to Kaiju alien monsters and giant Jaeger robots battling each other and Pacific Rim Uprising opens 10 years after the Battle of the Breach was won by the humans. The first movie was entertaining enough with an exciting finale so I was looking forward to see what Uprising had to offer!

I was a little disappointed after watching Uprising as I had so many questions I wanted answering! Uprising relies a lot on CGI and less on storytelling and plots. There is a plot but it is very basic and with one twist I didn't (but should have) seen coming. Although there are fighting scenes, there wasn't as much action as the first film and I was anticipating a lot more battles between the Jaegers and Kaiju's. I was also expecting the technology to have advanced a lot more in the 10 years since the Battle of the Breach. Apart from a '3 person Jaeger' the robots don't appear to have been upgraded in any significant way which was surprising.

Considering there wasn't as much robot v alien action, I would have thought more time would have been spent on character development, however, I was let down in this department as well. The three main characters definitely appealed to a younger audience with John Boyega (Star Wars) playing the rebellious Jake Pentecost, the son of Stacker who gave ups his life to secure victory for humanity in the first film. Boyega cruises as Pentecost in this role that certainly doesn't test his acting skills. Scott Eastwood stars as Lambert, Pentecosts ex pilot partner and although he tries, he certainly doesn't have the screen presence as his father. And newcomer Cailee Spaeny plays orphan Amara Namani who, despite having no family or apparent friends, manages to become an amazing hacker and Jaeger builder at only 15 years old! The actors did as well as could be expected but their characters lacked depth and some of the dialogue was appalling.

After my husband and I had watched it, he said it was a waste of time and just an excuse to make money. Although it had a lot of flaws, I actually still found it entertaining in a lighthearted and enjoyable way. No concentration was required and if you are happy to sit back and watch some giant aliens fight huge manned robots then you won't be disappointed. 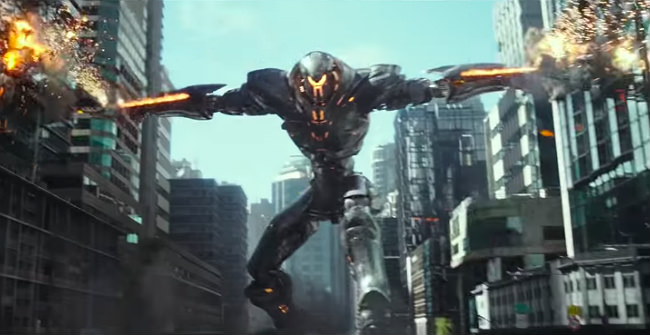 Honest trailers described the original Pacific Rim as the greatest stupid movie of all time, with weird romantic interests, confusing operating systems, but still entertaining with lots of giant robots fighting giant monsters. It's an opinion that I can't help but agree with. So when heading in to watch the film I was sure to keep my expectations low, with the only goal of seeing giant robots battle giant monsters again. To that end, Pacific Rim Uprising reached that goal.

It does come across very Transformer-y. One would say "but they are both franchises based around giant fighting robots", but it goes much further. The film follows one of the protagonists Amara Namani (played by Cailee Spaeny), who is a young street-wise woman living in a destroyed part of town, working on her own giant robots, before she gets dragged into the plot that the male protagonist is begrudgingly reluctant to be involved in. If that doesn't even slightly resemble the beginning of the latest Transformers (The Last Knight), then you clearly haven't watched that film. Cailee Spaeny even has some physical features that match that of a young Megan Fox.

But the film isn't really about Amara. Pacific Rim Uprising is all about Jake Pentecost and his reluctant search for redemption and forgiveness from his family and peers. As far as plot goes, the reasons that he ends up in control of the flagship jaeger is flimsy, but for the type of movie it is, we allow it. Even the forced tension between John Boyega and Scott Eastwood's characters thanks to the presence of a shared romantic interest is let go. It's all irrelevant. The only important thing in Pacific Rim Uprising is when and where these giant monsters of Kaiju come in.

And that is the real jewel of the film. The source of the threat came as a surprise, and while looking back there were many hints as to who the real threat was, it was actually well disguised through misdirection and red herrings. It connects the two films and reminds the viewers of those little details that were forgotten from the first movie. The only real downside to it was that until the climax of the film, we have received a rather Kaiju-free experience. "Minor" enemies became too numerous, too easy to kill, and therefore never really created the tension and suspense necessary to keep the viewers properly invested. Even the final boss proved slightly anti-climactic.

I suppose the real issue with the film, is that when in the original film, you have to create giant robots to destroy a surprise enemy, one would expect the robots to be more advanced in the follow-up. More advanced robots fighting better-equipped kaiju. An arms race of sorts. Instead, we are fed a long period of exposition with very similar robots, a series of unfortunate and extremely coincidental events, ending with a hail mary. It was just lacking. The whole plotline around the vastly superior jaeger was not used to full advantage, neither was the plot point that many people were building their own jaegers. I would actually have loved a military vs. militia to come up in the film.

There were definitely some cool and a few holy s*** moments, and it entertained throughout, but I was there to watch epic battles between the Jaegers and Kaiju, and just like in Batman v Superman, there was just not enough of the actual battles in amongst the exposition-fest.

Breaking up with Mark Darcy (Colin Firth) leaves Bridget Jones (Renee Zellweger) over 40 and single again. Feeling that she has everything under control, Jones decides to focus on her career as a top news producer.

Suddenly, her love life comes back from the dead when she meets a dashing and handsome American named Jack (Patrick Dempsey). Things couldn't be better, until Bridget discovers that she is pregnant. Now, the befuddled mom-to-be must figure out if the proud papa is Mark or Jack.