Home > Categories > Movies > Action > The Flight of the Phoenix review

ProdID: 594 - The Flight of the Phoenix
Directed by Robert Aldrich 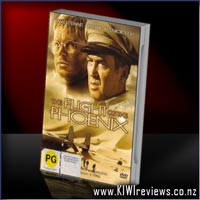 Disclosure StatementFULL DISCLOSURE: A number of units of this product have, at some time, been supplied to KIWIreviews by the company for the purposes of unbiased, independent reviews. No fee was accepted by KIWIreviews or the reviewers themselves - these are genuine, unpaid consumer reviews.
Available:
24th May 2005

The Flight of the Phoenix product reviews

One of the most startling twists of fate you have ever experienced in a motion picture!

When their cargo plane crashes in the Sahara Desert, the only hope for a crew of oilmen and military personnel is to try to rebuild the craft before they all perish from heat and deprivation.

Based on Elleston Trevor's popular novel of the same name, and artfully directed by Robert Aldrich, The Flight of the Phoenix is a riveting combination of finely honed character studies and an exciting story line.

I grew up hearing about Attenborough, Borgnine and Stewart as stars of the big silver screen, but never got much chance to see them in their glory days. Borgnine I saw on TV a few times in later years, but let's face it... a 21" screen can't match a huge widescreen format presentation with floor-shaking sound.

As a bit of an enthusiastic MacGyver-wannabe, and appreciative of W. Heath Robinson's often-outrageous devices, this movie had a really clever twist that reallt appealed to me. A plane crashes in the desert. One of the passengers claims he can calculate and design a workable escape craft from the remaining wreckage.

Proposing a risky but viable plan, which must be completed to a very short deadline before everyone is too weak and dehydrated to work, which also requires faith, determination, and some improvisation worthy of a master, Hardy Krüger as 'Heinrich Dorfmann' (pictured, but not named on the front cover) really is the central character. Though he has been in 64 movies spread over a 44-year career, I'd never heard of him.

This movie really took me by storm, capturing my imagination not only by it's highly-involved plot and deep characterisations, but also with it's twists, innovative engineering concepts, and the highlight had to be Ernest Borgnine as a mentally deranged oil driller on his way home in disgrace. He was totally wacko, it was great entertainment.

Despite the somewhat serious nature of their plight, and the countless trials the characters face, this movie actually comes across as somewhat light-hearted... much like the 2004 remake starring Dennis Quaid. However, behind the scenes, this movie has a tragedy as an integral part of it. As quoted from IMDB.com: "The plane they leave on at the end of the film was to be a C-82 Boom. The stunt of taking off was too dangerous, so legendary stunt pilot Paul Mantz was asked to merely come in low, run his landing gear along the ground, then take off again, simulating a take-off. On the second take the plane crashed and was destroyed, killing Mantz. As all main footage had already been shot, a North American O-47A observation plane from the Air Museum was substituted for the remaining close-ups." Paul Mantz was aged 62 at the time.

Overall, a great movie. It won't be everybody's hit-pick, but then, nothing is these days. This is a classic 60's-era drama/thriller and has everything going for it. By all means watch the modern version, but if you appreciate the raw feel of a genuine cinematic classic, forget the glossy hollywood remake and buy yourself a copy of the real deal.