Asterix and the Chariot Race review 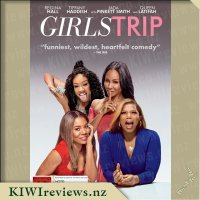 I settled down to watch this with expectations of having a good giggle. The trailer had given a snapshot of a comedy which was fairly predictable, dare I use that word. The first quarter of the movie was as I expected, several laughs and an underlying story of an old wound and life that had placed a chasm between four friends, who had previously been inseparable.

There was an undertone of nostalgia for life when things were easier, the time when life decisions were shall I wear the red dress, or the blue dress? There was a desire to get back to those days and of course the traditional embarkment down this path with results that were not what was desired! It was a third of the way through the movie that I found a deeper story, the laughs got more authentic, and I found myself feeling for the lead characters, seeing their strengths, and their challenges and Queen Latifah brings to her character the presence that she is famous for.

I was actually willing the characters along at the end, wanting a happy ending, as they became more real and I could identify with them. I would recommend this movie for a girl's night in, a few wines, and a few friends and you would have a lovely evening, it is a movie that improves as it goes on, so that is something to keep in mind as you view. Personally, I would classify this as a chick flick, if you loved bad Moms this movie is for you.

In the action-comedy 30 Minutes or Less, Nick is a small town pizza delivery guy whose mundane life collides with the big plans of two wanna-be criminal masterminds. The volatile duo kidnaps Nick and forces him to rob a bank. With mere hours to pull off the impossible task, Nick enlists the help of his ex-best friend, Chet. As the clock ticks, the two must deal with the police, hired assassins, flamethrowers, and their own tumultuous relationship.