ProdID: 7613 - Dragonheart: Battle for the Heartfire
Directed by Patrik Syversen 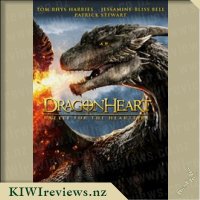 Action, Adventure and Fantasy Await in this exciting new chapter of the Dragonheart Saga.

Patick Stewart voices Drago the magnificent dragon who became bonded with King Gareth. When the king dies, his potential heirs, twin grandchildren who posses the dragon's unique strengths, use their inherited powers against each other to vie for the throne. When Drago's source of power -0 know as the Heartfire - is stolen, more than the throne is at stake., the siblings must end their rivalry with swords and sorcery or the kingdom may fall.

I adore Dragons and the Dragon's portrayed in the Dragonheart movies are amazing. The way they movie, talk, fly you would be mistaken for thinking it was real. It truly is an impressive thing to witness. For a rather low budget movie the quality of the special effects are spectacular and I have to say it is definitely one of the better dragons I have seen if not possibly the best. Even when Drago was behind a curtain and all you could see was his shadow it oozed of authenticity. I have to give credit where credit is due, if you love dragons then this is the movie for you. In saying that, unfortunately I can not rave as much over the movie.

I found the acting to be rather lacking and it wasn't till the end of the movie when it finally dawned on me this is a family movie and now it makes sense as to why it was dumbed down. I am not sure why but I was under the impression it was for adults, but with no swearing, low key fight battles and mainly dealing with sibling rivalry it is aimed at young teens, possibly even younger.

I found Drago actually took a back seat for most of the movie and acted more as a psychologist dealing with two fighting kids. He was always present but usually at the back of the shot. Also as with most sequels the rules of the first movie have been altered and the bond is split between Edric, Meghan and Draco so forget everything you ever thought you knew. Basically only Draco feels the bond and the kids have adopted super powers as well as scales, beyond that the bond is really non existent which is a pity.

I also found with the first adaption where Sean Connery was Draco you were more invested in him living as he was funny and had personality and as much as you hated the king you did not want him to die. In this movie I did not care either way, besides of course the fact that I love Dragons and have always wanted a pet one. But as a character in the movie I did not full in love with him and I did not care what happened to the spoiled little kids. I was kind of hoping he would of killed one of them off and just be done with it.

Its not a bad movie it just moves at a rather slow pace and is drawn out in areas and also the inconsistencies to the story were annoying. It is watchable but a movie you will probably forget all about in a couple of days. I think kids would adore it but then you have the 'sad' factor of when Draco goes to the stars but at the same time it is a happy occasion as that is where all dragons want to go. But actually, when thinking about it that was even under done and you are not left feeling anything but yay its just about finished. Nothing like the first one but then sequels seldom ever are.

Margaret Mahy is famous for her children's and young adult books and has received many literary accolades including the Hans Christian Andersen Award in 2006 - the ... more...