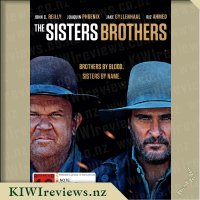 Disclosure StatementFULL DISCLOSURE: A number of units of this product have, at some time, been supplied to KIWIreviews by the company for the purposes of unbiased, independent reviews. No fee was accepted by KIWIreviews or the reviewers themselves - these are genuine, unpaid consumer reviews.
Available:
in selected retailers June 2019

Based on Patrick deWitt's acclaimed novel of the same name, two brothers--Eli (Joaquin Phoenix) and Charlie Sisters (John C. Reilly)--are hired to kill a prospector who has stolen from their boss. A reimagining of the cinematic Western as a dangerous, witty, and emotionally cathartic exploration of what it means to be a man.

The film was marketed as a comedy-western but that in itself is a bit of a misnomer. While there are some comedic elements to this film, The Sisters Brothers is a murky, melancholic character piece. Character-driven dramas are largely plotless films that rely heavily on the charisma and relatability of the protagonists. If it is poorly written, then the film will fail without a strong plot.

For the general moviegoer, enjoyment in a character-piece comes from relating to the characters; unfortunately, none of the four main characters involved in this film are. The audience is stuck in a predicament where they neither care, understand, nor relate to any of the major characters. It is a pity when you get such big names a Joaquin Phoenix, Jake Gyllenhaal, and John C. Reilly, yet the final product fails to evoke any kind of meaningful emotion.

To be fair, Reilly does a good job and is the closest character to someone that I could empathise with, as the film spends a lot of the time trying to humanize him and turn him away from his life of crime. It still takes a very long time time to get used to his character, as his accent instantly pulls you into the frame of mind that we are in an Adam McKay comedy. Riz Ahmed (you may remember him as the antagonist in Venom). Visually, Gyllenhaal and Phoenix are exceptional, and the latter has a top-notch performance (if only his character was likeable at all).

There is an arthouse element that will appeal to a certain crowd (and apparently to most reviewers as well), but I have simpler tastes, and I am not a fan of films that don't feel like they have a protagonist. It feels more like three antagonists and an NPC, and the constant tension between every single character and inconsistent tone made it difficult to truly appreciate the film.

To be honest, the film failed to grab my attention at all. Right from the opening scenes, there was nothing that made me care about any of the characters and their journey, and as such, with the 121-minute runtime, I was suitably bored with this western film that had no real direction. Not even able to end on a high point, after the climax the film carries on, and then it carries on, and then it carries on before ending on a whimper.

There is no sense of value attributed to any lives in the film, and it desensitizes its audience to the violence onscreen, but the desensitizing doesn't stop there; emotional wellbeing and loyalty are also disregarded on several occasions, with no consistent reasoning provided. It is only in the third act, where it starts to get interesting. When alliances are tested and behaviours are questioned, but alas the film moves on very quickly, returning to the more banal storylines.

The Sisters Brothers is so arthouse that it excludes most modern-day audiences. Brilliant production design, a large budget, high-quality cast and director, but a lack of engaging characters proved to be its downfall.

Catapulted into the heart of a terrible struggle, Lyra ... more...