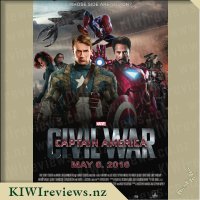 Captain America would be my least favourite Avenger if I was to be honest, for some reason I just don't like him or the actor who plays him. When this first came out at the movies, I let my husband go with his friends as I knew it would not appeal to me. He came home that night raving about it saying how well it was done compared to the comic books and asked did I want to go see it with him again, I told him that I would hold out till it played on Sky. Although, watching it last night on the couch could of sworn I was at the movies as it feels like such a 'cinema' film, at times I had to remind myself I was indeed at home.

As I was afraid, I found it too political for my liking. It made me rather angry and I think I was more annoyed at Iron Man for choosing the wrong side, I ended up agreeing with Captain America. I hate the way public turn on politicians/celebrities when things do not go there way. Accidents happen and yes innocent people sometimes get hurt but imagine if they did not help to begin with. The argument that the bad guys would not of attacked to begin with if the Avengers had not grouped was just silly and there was way to much talking for my liking.

In saying that when the action happened (and it went on for too long), it was still great to watch especially when it was Avenger on Avenger. The stunts were fantastic even if they were completely unrealistic and I enjoyed watching the fighting scenes. I did however, find a majority of the film was drawn out and the comic relief was missing. That was until Spider Man joined the band of merry men - he brought back the laughter and the silly banter which had been missing for a majority of the movie, even Ant Man seemed to struggle in leaving me amused at all. It was nice having Hawk Eye return and seeing the other familiar faces and seemed to pick up perfectly from the previous Avenger movie. One thing I must commend the movie on was keeping it Captain America's story, even with all of these characters it still remained primarily his film.

Stan Lee made his usual cameo and I have to admit I was getting a tad worried and even commented to my husband is he doing a Dead Pool and not appearing in the movie but he showed up at the very end and it was comic gold. The hints for the next movie were also shown and unfortunately seems like its a Spider Man movie. It still leaves you wanting more and holding out to what will happen next. My husband loved it but then he is a Marvel Comic Book fan, where as I tolerated it and in all honesty would probably not watch it again. I have watched all of the films in the Marvel Cinematic Universe (MCU) to date, so despite all of the hype that was built up around this film and the seemingly large amount of footage being shown in the trailers and TV spots, I was greatly looking forward to seeing the next installment. Civil War is one of the Marvel graphic novel stories that I have actually gone out of my way to read before the film, so I had an idea of the source content and potential plot beforehand. And it is safe to say that it was used as a source of inspiration, but the film deviates quite a lot from the Civil War storyline.

While it works out well as a standalone film, the MCU is called such, due to the fact that all their films take place within the same universe, and thus each contributing film has an effect on all future films despite the focus being on different, "unrelated" characters. There are several scenes that require additional information to fully grasp the emotional state of the characters, and to understand who certain "minor" recurring characters are. So while the film works well as a standalone, I would greatly recommend watching 'Captain America: The First Avenger', 'Captain America 2: The Winter Soldier', and 'Avengers 2: Age of Ultron', to understand the relevant sections of the MCU backstory for this Civil War arc.

As a forewarning, this film does include some "shaky cam" fight scenes early in the film, so be aware that it can put quite a strain on the eyes if you are watching in 3D. I found it very difficult to fully appreciate the choreography. 2D would certainly be my recommendation, as 3D does not do it justice.

The opening scenes of the film are instantly action-packed and you could be forgiven for thinking you were watching another 'Avengers' film, but certain unexpected events occur, which steer the plot in a new direction. The first stages of the film do follow along with the source material for the Civil War graphic novel, but on a smaller scale (whereas the graphic novel included nearly every marvel hero in creation, this film only uses 12). Scale is one area in which this movie suffers a little bit. The smaller 'teams' do make for a more tangible action sequences but it does lessen the significance and supposed "wide-spread impact" of the dividing aspect in the storyline.

There are a number of scene changes in the first act of the film, and recurring flashback moments, which can, to begin with, seem a little off-putting and needlessly disconnected to keep track of. But by the end of the film, you will feel the satisfaction in knowing that all of the seemingly disjointed moments had a purpose, and it is a stroke of brilliance. I did not expect the twist, and as it began to dawn on me, the import of it had me grinning like the Cheshire Cat (luckily, I was in a dark theatre so nobody could see me).

This is, however, a Captain America film, and I feel the directors and writers have done a brilliant job ensuring that the focus does somehow still remain with Captain America. The events are very much a continuation of the 'Winter Soldier' arc in the previous Captain America film, and it provides the feature that grounds the audience, and creates that difference in perspectives. As with the 'Winter Soldier' installment, Civil War takes both a much more sombre (melancholic) and somber (dark and gloomy) tone, and has a fair bit of tension and suspense. That is not to say that there is no comedy. While widely dispersed, there are many points in the film where the viewers will find themselves with a wide grin, and whole-heartedly chuckling out loud. Much of the light-hearted comedy feels fresh and authentic, providing a welcome break from the nerve-racking tension that you may feel watching your favourite superheroes clashing violently.

There are two new additions to the MCU superhero roster; Black Panther and Spider-Man. Spider-Man has obviously been in plenty of films beforehand, but due to a long-awaited agreement on some movie right concessions, this is his first appearance in an actual MCU film, and the latest iteration of 'Spidey' has finally managed to lose the dull, brooding attitude that really held back the other Spiderman films. Tom Holland's version of Spider-Man is the youngest to date, and perfectly displays the natural curiosity and wonder, as well as the strength and agility that the graphic novels created. Spider-Man's role in this film is again different from the Civil War graphic novel, but provides a great re-introduction to the character, and his hot Aunt May. Black Panther's role was rather a surprise for me, and the large role that he plays in the film is well done. No origin story is really provided, but his action scenes are amazing, his seemingly simple skill sets are surprisingly efficient. The upcoming solo Black Panther film (July 2018) is already a date that I am looking forward to due to his impressive performance.

Apart from Chadwick Boseman's Black Panther, Sebastian Stan a.k.a. the Winter Soldier was the most convincing character, in my opinion. He is the perfect embodiment of a mentally unstable, emotionally disturbed individual, and he pulls off the unkempt, unruly look so well. On the other hand, Paul Bettany's role as Vision was a rather lacklustre performance. Whether it is due to the fact that I still have no idea exactly what his powers are, or the fact that his presence in the film is downplayed, treating him more like an un-powered sidekick than a contributing member of the team.

An aspect that I do love about Marvel is how they will generally try to avoid revealing the villains in the trailers (one of the things that annoyed me to no end with 'Batman vs Superman'), and Civil War is no different. I had heard rumours around the villains, but was genuinely surprised by the character and motives. He plays an important role, tying together many important events, but ultimately doesn't take your attention away from primary focus; the "Civil War".

In the end, as a viewer, I found myself torn between both sides. You could see the flaws in both arguments, and you could tell that the remaining options were less than perfect. But that is what kept you engaged. As one character does something questionable, your support swings to the other, and promptly swings back and forth as new information comes forward and action scenes occur. I'm interested to see how this will affect future MCU films, and there is no doubt that I will be sitting in the theatre for every last one of them.