« A for Andromeda anthology review 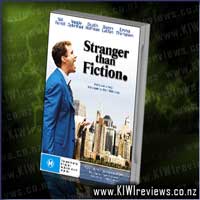 After ten years of painstaking work, novelist Karen Eiffel is nearing completion on her latest, and potentially finest, book. Her only remaining challenge is to figure out how to kill off her main character, Harold Crick.

Little does she know that Harold Crick is inexplicably alive-and-well in the real world, and suddenly aware of her words. Fiction and reality collide when the bewildered and hilariously resistant Harold hears what she has in mind and realizes he must find a way to change her (and his) ending.

I like a movie that is a bit strange, a bit odd and a bit out of the ordinary that still provides a good movie and some fun times, Stranger The Fiction is one of these such films.

Harold Crick is your average guy who works as an auditor, one day he starts to hear a voice narrating his day and begins to freak out, as one would. He eventually finds out that he is the main character of a book being written in real time, the author, currently suffering from writers block is trying to figure out how to kill off what she believes is a fictional character. The jumping between Harold Crick and Karen Eiffel could be very confusing but it is so well done that it doesn't confuse you too much.

All the characters are believable, which considering I wasn't expecting Will Ferell to do this role well, is a really good thing. Harold feels real, not like he's a character but more like an actual person, which really helps with the believability with this movie. Emma Thompson plays the stressed out write very well, Queen Latifah's role didn't strike me as a new character type, but she still did well. I really liked the way they ended the movie, rounding it all off well.

If you like offbeat movies then this is a must.

I really didn't know what to expect from this one. It has such an eclectic cast, and such a warped storyline... I was half expecting something truely brilliant, or something totally -yawn-provoking! Thankfully... it was quite different, funny in places, thought-provoking in places, and overall quite good viewing.

Emma Thompson plays a stunning role as the writers-block-suffering author of a series of books that always end with some poignant, but messy, death of their lead male character. Her angst, distraction, and near-breakdowns are so authentic and convincing, I had to wonder if she really was suffering some mental distress...

Overall, though not at all believable, this movie raises some interesting questions into the nature of "living life" vs "being alive"... if you were to die tomorrow, would you look back on a full, worthy life, or a handful of years of just passing time, with a few interesting bumps in the road? The movie itself, I could take or leave... but I loved watching it for it's carnival-mirror reflections of life out in the 'real world' that we inhabit.

Living in and patrolling the breathtaking skies from thousands of feet above, his soaring existence is brought crashing down when he rescues a beautiful stranger from a downed spacecraft. Her arrival ... more...