Home > Categories > Movies > Fantasy > In the Name of the King review 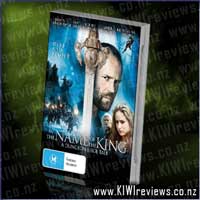 In the Name of the King product reviews

In a final confrontation that will determine the fate Ehb, it is up to Farmer to claim his birthright and defeat Gallian or allow the evil wizard to take control of the land.

Jason Statham. That was the drawcard for this movie. Just happened to see his face on a DVD cover, for a film that I had never heard of, so thought "Why not?". When you are greeted with an actor such an Jason Statham, and he is a formerly lost child, known only as 'Farmer', well you know something will happen to him.

But that doesn't matter. Including mage's, knights, and some tree nymph things, this film has a lot of similarities with table-top role playing games. This film contains the usual action-packed Jason Statham fight scenes, along with supernatural Father-Daughter Mage fights. It is an exciting movie that despite its predictability at times, proved to be a great watch.

The names that are amongst the cast are surprising, with names such as Burt Reynolds, and Ray Liotta. And Leelee Sobieski is a touch of beauty, and proves to provide a strong female presence in the film.

A typical good versus evil fight ensues during this film and it is comparative to the white knight /black knight battles that are expected in this crusading medieval time period. A surprisingly enjoyable film, that Jason Statham and Leelee Sobieski manage to pull through the gauntlet, and make it something that I would watch again.

Never have been a great fan of roleplay games mainly because of all the dice rolling required. I guess it was also because I could never really get my head into that whole swords and goblins mentality. But seeing this movie not only gave me a great way to pass an afternoon doing something other than washing the car, but also gave me a really interesting insight into what goes on in the imaginations of those who finds sitting around in darkened rooms with a bucket of dice and a notepad a worthwhile passtime.
The movie was pretty good, but the highlight had to be the cast. For a mediocre movie it had a top-flight talent list. Leelee Sobieski, who I first saw in "House of Glass", pulled off a great 'warrior princess' (eat ya heart out Xena) while I was impressed at just how well Ray Liota pulled off the evil wizard role. He was quite at home in his insane magic-wielder persona, almost too comfortable.
The real drawcard for me was Jason Statham as he is rapidly becoming one of my favourite action stars. His character, the mysterious 'Farmer' with a lost history, was a little weak but his sheer presence made it worthwhile watching despite the amazingly mild and at times stilted fight choreography.
Amazingly, despite some astoundingly simple mistakes in production (see if you can spot what looks a lot like a microphone sticking out of a hedge) and a few outrageous exagerations when it comes to the distance someone could travel in the time portrayed, the movie was pretty entertaining if you suspend your disbelief and just get into the flow of things.

Every year in the ruins of what was once North America, the evil Capitol of the nation of Panem forces each of its twelve districts to send a teenage boy and girl to compete in the Hunger Games. A twisted punishment for a past uprising and an ongoing government intimidation tactic, The Hunger Games are a nationally televised event in which "Tributes" must fight with one another until one survivor remains.