The Wild Thornberrys - Heroes of the Animal Kingdom review 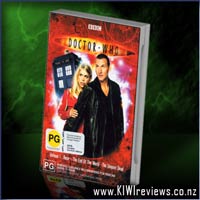 Doctor Who is back after a long time away from our TV and we are introduced to the newest incarnation of the Doctor, the 9th.

We are quickly thrown into the new series, no slow ease into it, you're simply thrown in expected to know what is going on, which I thought was great. We meet Rose, his soon to be companion, when she closes up for work and meets mannequins that have come to life. Whilst the big baddie in this episode wasn't done that well (special effects) it's easy to tell it was budget, though it could have been better.

Episode two we meet the last pure human 'alive' though I sincerely hope that we never get to that point where someone would go through all of that just to remain 'pure'. I loved some of the aliens, especially the ones that were wood. "I give you the gift of air from my lungs: - Loved that line.

The Unqiuet Dead we are introduced to some new aliens as well an actor who would later be one of the main characters in Torchwood, a Dr Who spin-off. Another really well done, revitalising the series, episode.

These three episodes did a great job at helping to bring back the Doctor to our TV screens.

I have been a total Doctor Who fanatic since I saw reruns of the episodes with Jon Pertwee who I had first encountered in his guise as Worzel Gummidge. With a huge 9 year break between the eighth Doctor (Paul McGann) and this Doctor I was wondering if my favourite Gallifreyan was ever going to pass by Earth again. When I then saw that the delightful and delectable Billy Piper was going to be the new 'travelling companion' I was hooked all over again. These are the first three episodes in the new series starring Christopher Eccleston as the ninth incarnation of The Doctor, the last remaining survivor of the Timelord race. The first episode, "Rose" has The Doctor appearing in the middle of suburban London and meeting Rose as an incidental encounter while he tries to deal with a huge living blob of plastic that has the ability to animate any plastic object within its telepathic range. In "The End of the World" The Doctor takes Rose to see the day the Earth is destroyed by the sun expanding and engulfing it, but more dastardly deeds are afoot in this lonely little space station observatory. "The Unquiet Dead" has the Doctor and Rose exploring Voctorian England during the era of Charles Dickens trying to explain why the dead are walking and calling for help. If you enjoy sci-fi you should really enjoy this series of Doctor Who. Full of puns and insider jokes, sideways references to other shows and episodes from older Doctor series this is a really timely reinterpetation of a wonder show that first started back in 1963 with William Hartnell and has been going strong ever since.

After serving as a British Army nurse in World War II, Claire Randall is enjoying a second honeymoon in Scotland with husband Frank, an MI6 officer looking forward to a new career as an Oxford historian.

Suddenly, Claire is transported to 1743 where her freedom and life are threatened. To survive, she marries Jamie Fraser, a strapping Scots warrior with a complicated past and a disarming sense of humor. A passionate relationship ensues, and Claire is caught between two vastly different men in two inharmonious lives.

"Outlander" is adapted from the best-selling books by Diana Gabaldon.