A Fish in the Swim of the World. review

ProdID: 997 - Doctor Who - Genesis of the Daleks
Type of Show: Sci-Fi Series 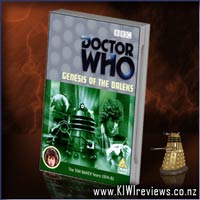 Doctor Who - Genesis of the Daleks product reviews

The Doctor and his companions are transported back in time by the Time Lords who have decided that the Daleks need to be destroyed. The Doctor's mission is to change history so that they have never existed. Soon they are separated and The Doctor and Harry are captured by the evil Elite of the mad scientist Davros, who is working to perfect his Mark 3 travel machine: the Dalek.
Special Features:

For most people, 'Genesis of the Daleks' means only one thing: Davros. And quite rightfully, top honors go to Michael Wisher. Watching him this time I was struck by the fact that not only does he have to contend with a full head mask and the very limited use of one hand, but the character is totally immobile. Sitting stiffly upright and staring straight ahead, Davros exhibits no body language whatsoever. Wisher doesn't have the option of performing with his eyes, and even his voice is robbed of its full vocal range. And yet through all this, he reaches us, and firmly establishes Davros as one of the most chillingly memorable villains ever. A master manipulator, Davros only loses control of the situation at the very end. Pleading with his creations to show pity, he discovers that it's precisely because of his own design that the Daleks do not even understand the word.

This seems to typify Genesis. It scores points so consistently that you forgive the flaws and follow the story with enjoyment and admiration. Genesis of the Daleks is a good reason to be a Doctor Who fan.

Dr Who was very much a cult show, and once the longest Sci-Fi show in the world.

Most shows from the 1970's look very dated, On watching the show, I was surprised at how un-dated it looked. I guess that was part of the joy of being able to re-watch this show, and relive so many memories with my daughter, who was as taken with it as I was.

And that scarf... I so wanted a scarf like that as a child. What child didn't?

Winner of the Best Drama Series award at the 2010 BAFTA Television awards, Misfits is a bold comedy drama based on a script by Howard Overman (Hustle, Merlin and Spooks: Code 9), that subverts the superhero genre with a knowing take on how hard it is to be a hero in the modern, cynical world.

When five teenage outsiders on community service get struck by a flash storm they end up with special powers. Hard-as-nails Kelly can suddenly ... more...