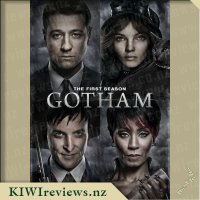 Everyone knows the name Commissioner Gordon. He is one of the crime world's greatest foes, a man whose reputation is synonymous with law and order. But what is known of Gordon's story and his rise from rookie detective to Police Commissioner? What did it take to navigate the multiple layers of corruption that secretly ruled Gotham City, the spawning ground of the world's most iconic villains? And what circumstances created them - the larger-than-life personas who would become Catwoman, The Penguin, The Riddler, Two-Face and The Joker? Gotham is the origin story of the great DC Comics Super-Villains and vigilantes, revealing an entirely new chapter that has never been told. From executive producer/writer Bruno Heller (The Mentalist, Rome), Gotham follows one cop's rise through a dangerously corrupt city teetering between good and evil and chronicles the birth of one of the most popular super heroes of our time. Gotham is a delightfully dark and gritty series based around the DC Comics universe; specifically that of Batman. But rather than basing it solely around the character of Bruce Wayne, the show places more emphasis on the balance of crime and law enforcement, following Jim Gordon's movement through the Gotham City Police Department.

Starting with the death of the Bruce Wayne's parents, we see the introduction and evolution of a plethora of characters; some well-known (Cat Woman, Penguin, The Riddler), and others lesser known. As a fan of the superhero genre, with respects to the movies and television series, I enjoyed discovering new characters, and spent a lot of time on Wikipedia researching the names of the bad guys that turn up in the series. If you love a good origin story, then you will love this series. It is a series of origins, that encourages you to look further into the history of the characters in the graphic novel universe.

The casting is superb, and while some characters take a while to get accustomed to, their characteristics and personalities heavily imbibe that of the source material. The series is dark, and pulls no punches. There are no happy endings. No plan comes to fruition without unforeseen setbacks, and it gives this world a realistic vibe. The series starts off with a mini story arc per episode, but as the series follows on, the show becomes a part of a larger arc that encompasses the whole season.

I will admit that at times I can be frustrating; the main story arc can move very slowly, and setbacks will actually hold the story back. I loved the Batman "Dark Knight" films, so I look forward to seeing Bruce Wayne don the mask. But it is definitely a long way off.

Slightly on the expensive side, but well worth the cost, as the story is engaging, the characters scintillating, and I cannot wait for Season 2!

Procedural drama about the inner workings of the New York office of the FBI, bringing to bear all the Bureau's skills, intellect and mind-blowing technology to keep New York and the country safe.