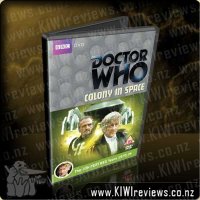 All episodes are newly re-mastered, utilising advances in technology and technique, and are supported by a fantastic collection of bonus features.
The Time Lords discover that the Master has stolen secret files revealing the location of the dreaded Doomsday Weapon. They summon the Doctor out of his exile on Earth and send him five centuries into the future to the planet Uxarieus to retrieve and safeguard this vital information.

Arriving on Uxarieus, the Doctor and Jo encounter a group of Earth colonists whose very existence is under threat and representatives of the ruthless Interplanetary Mining Corporation are disputing the colonists' claim to the planet. Their only hope is placed on the imminent arrival of an Adjudicator from Earth to resolve the dispute.

Meanwhile, the Doctor pursues his mission, but first he must deal with giant lizards, killer robots, and deadly primitive tribesmen - knowing all the while that the Master cannot be far away.

Here we have a story from everyones favourite scarecrow Worzel Gummidge..... Whoops sorry wrong TV series. Now that I have my mind set to the correct TV series, lets get on with it.

This story comes from the third incarnation of the Doctor, and this story is rather unique in that it is one of the few that were set on another planet. The third Doctor was exiled to the Earth by the Time Lords and so spent most of his adventures there. This was a way for the BBC to save on expensive alien sets, however on rare occasions they did write a story set on another planet and this is one such story.

This story also includes the Doctor's arch nemesis The Master, played by Roger Delgado. This was the fourth appearance of the Master who was quickly becoming a favourite villan.

Whist the story is similar to many other doctor who stories, it still holds a certain charm, and of course being one of the few set off the planet earth it gave us the opportunity to see yet another world in the continuously expanding doctor who universe.

I do have to admit that the Doctors companion during this period wasn't really one of my favourites, she just didn't work for me, but then thats just my opinion and many other people thought she was great.

I think that once again this is another good solid episode series from Doctor Who and another one to add to the old DVD shelf.

In the epic drama The Last Ship, a global catastrophe has nearly decimated the world's population. The Navy destroyer USS Nathan James avoids falling victim to the devastating virus; the crew and its captain must find a way to pull humanity from the brink of extinction.