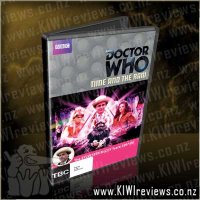 Doctor Who - Time and the Rani product reviews

Featuring Sylvester McCoy as the newly regenerated seventh Doctor, this new DVD features the Doctor's battle with the evil Rani.

After being attacked by the Rani, the TARDIS crash-lands on the planet Lakertya. On the floor of the console room, the Doctor begins his sixth regeneration. In his post-regenerative confusion the Doctor is separated from his young companion Mel and tricked into assisting the Rani in her megalomaniac scheme to construct a giant time manipulator.

Lost on the barren surface of the planet, Mel has to avoid the Rani's ingenious traps and her monstrous, bat-like servants, the Tetraps. She joins forces with a rebel faction among the Lakertyans, desperate to end the Rani's control of their planet. The Doctor must recover his wits in time to avoid becoming a permanent part of the Rani's plan to collect the genius of the greatest scientific minds in the Universe...

Extras:
•  4 x 25 mins approx colour episodes with mono audio
•  Commentary - stereo. With actors Sylvester McCoy and Bonnie Langford, writers Pip and Jane Baker
•  The Last Chance Saloon - by 1987, senior executives at the BBC were on the point of killing-off Doctor Who in the face of stiff fan opposition. Instead, they decided to give the show one last chance
•  7D FX - a look behind-the-scenes at the creation of the story's impressive visual effects with visual effects designer Colin Mapson, visual effects assistant Mike Tucker and video effects designer Dave Chapman
•  Helter-Skelter - Graphic designer Oliver Elmes and animator Gareth Edwards talk about how they created the first CGI title sequence in Doctor Who's history
•  Lakertya - writers Pip and Jane Baker talk about their original vision for the lush forest planet Lakertya and director Andrew Morgan explains why he ended up shooting it in a desolate quarry instead
•  Hot Gossip - Kate O'Mara recalls the fun of working with gossiping friends
•  On Location- BBC Breakfast Time's reporter Guy Michelmore visits the production during location filming for the story's exterior scenes and talks to John Nathan-Turner, Sylvester McCoy, Bonnie Langford and Kate O'Mara
•  Blue Peter - Janet Ellis welcomes newly appointed Doctor Who Sylvester McCoy to the Blue Peter studio
•  Photo Gallery - production, design and publicity photos from the story.

As an old school Doctor Who fan I can only sing praises for the classics.

Couple the rich story lines, and garish costumes with the eccentricities of The Doctor and you are in for a treat. Although 'Time and the Rani' is made in the late 80's, the special effects are still on par for the time.

I would recommend this for anyone who is new to the world of Doctor Who, however I would suggest either starting at the beginning (William Hartnell, 1963), or jumping to the later series (Christopher Ecclestone, 2005 and onwards).

A great series to follow for most ages, young and old.

It's time to raise the curtain on THE MUPPET SHOW!

Join Kermit, Miss Piggy, Fozzie Bear, the Swedish Chef and more, in the first season of this groundbreaking twist on the classic variety show.

Contains all 24 episodes, which have been completely restored and remastered. The special features also include something you were never meant to see: Jim Henson's original "pitch reel" that propelled the Muppets' blend of original ... more...