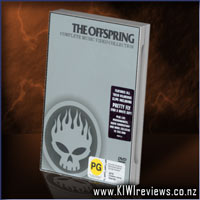 Hot on the heels of The Offspring's 'Greatest Hits' album comes the 'Complete Music Video Collection', more than 2 hours of DVD showcasing all of the band's groundbreaking and often hilarious videos, from the early raw Epitaph clips through to the group's new single, 'Can't Repeat.'

The Offspring's patented blend of rapid-fire musicianship, pulsing chords, unforgettable hooks, youth culture angst, and deadpan wit can be seen and heard in videos for tracks like 'Come Out And Play (Keep 'Em Separated),' 'Self Esteem,' 'Gotta Get Away,' 'All I Want,' 'Gone Away,' 'Pretty Fly (For A White Guy),' 'Why Don't You Get A Job,' 'The Kids Aren't Alright,' 'She's Got Issues,' 'Original Prankster,' and 'Hit That,' among others.

When the punk rockers first emerged from The OC in the early 90s, they did so with such panache and fire that they managed to stay relevant and successful to this day. Their 'Greatest Hits' album has stormed the charts, and now their DVD looks set to follow suit.

As an additional bonus for fans, The Offspring's 'Complete Music Video Collection' includes the band-produced video rarities, 'Da Hui' and 'Cool To Hate.' Also included on the DVD are a wry audio commentary on the videos from Dexter Holland and Noodles; a selection of live television performances; and a segment called 'Guy Cohen: Where Is He Now?,' which is Dexter's penetrating interview with the actor from 'Pretty Fly (For A White Guy).'

Having been a fan of the band ever since I first heard "Come out and Play", this was a real treat! Not only does it contain ALL of their greatest hits, but you get the videos too. My favourite video would have to be "Hit That" just because the dog is hilarious.

With all of the extra stuff (interviews, overseas versions, behind-the-scenes mini-docos etc) this is a great addition to any music video collection. If you claim to be a fan and don't already have this in your collection... well... you might want to go and get it before anyone finds out you're not up with the play.