Living to Write the End review

ProdID: 3620 - The Horrifying Truth
Performed by I Am Giant 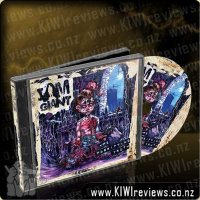 I hate having to follow on from the same theme as the previous reviewers, but I have always been a huge fan of Blindspott. They were the top rock band in New Zealand, with their debut album reaching triple platinum, and their sophomore album reaching double platinum. When they broke up in 2007 I was devastated, but was out looking for a new band to follow religiously. I had heard this interesting new song on the radio station with the memorable quote "Are we living? Or merely killing time?" and it made me stop and think philosophically. Not the best thing to happen when you work in retail, but it happened nonetheless.

I had also heard that the drummer of Blindspott had started a new band in the UK. Both this new band, and this new song, were things that I would bring up when conversing with friends at gatherings, but it took several months for me to click and realise that they were one and the same.

This debut album has a variety of songs, from quick and packed with energy (Purple Heart, Neon Sunrise), to slow and transcendant (Black Hole of my Heart). The album is best heard in its entirety from start to end, as a journey, though I will often just skip to my favourites. 'Electric Throne' is a legendary song, clocking in at over six and a half minutes, and featuring Kim Benzie from the Australian group, Dead Letter Circus.

Ed's vocals in this album pushes the category of rock to its limits, and is definitely worth a listen to any lover of music

With the end of Blindspott I was a bit lost as to what my new go to kiwi band would be, then one day I heard a new band on The Rock radio station with their single City Limits and all I could think is wow, there's an amazing band and how right I was with this album being proof

Straight from the 1st song Purple Heart the energy is high and the music is nothing short of amazing. My personal favourite song is Electric Throne (as my username suggests) it features Kim Benzie from dead letter circus and at over 6 minutes it is just pure awesomeness.

if you are to listen to this album you need to listen in the correct order and not just on shuffle or by skipping songs. The artwork is also some what of a marvel, got a dark but artistic feel to it with the lyrics in there to help you sing along.

Overall The Horrifying truth is the best kiwi album to have been released in many recent years, I truly cannot wait for the next one and am still listening to it on repeat to this day, 3 years after release. if that doesn't say something then I don't know what will!

As a band consisting of members from some of New Zealand's biggest bands; Blindspott, Tadpole and Stylus, and adding the relatively unknown vocals of a Brit to that mixing bowl it was always going to have strong results. For those that are yet to hear I Am Giant's songs, it is very hard to place their style of music into a category let alone compare them. A mix of mellow to hard rock is the best I can come up with.

This album certainly needs to be heard in chronological order. Just putting it on shuffle does not do it justice - for this reason I give a big score for composition.

Every song from the heavy opener of 'Purple Heart' to the softer final song 'After the War' fits perfectly together and is all moulded together with a couple of dark instrumentals in 'Bodies in the River Nile' and The 'Haunting of Elinor Shaw'. The iTunes version of the album adds their cover of Trinity Roots song 'Little Things' which is worth the download if you were like me and got the physical copy of the CD.

The Album's Booklet itself is a piece of art with some amazing dark artwork throughout the album which works very well with the feel of the album.

As a huge fan of Blindspott and Tadpole I was hoping for big things from this album and I was not disappointed. Nearly every song could have been released as a radio friendly single with no issues.

Verdict - Can't wait for the next one!