How to Build a Girl review 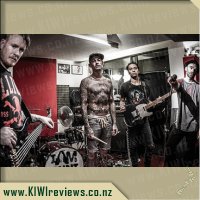 I Am Giant product reviews

I Am Giant is a rock band from New Zealand, currently based out of London. They formed late in 2008 and released their debut album The Horrifying Truth on 1 August 2011 in Australia and New Zealand, where it has been certified Gold and delivered four Rock Chart No. 1's.[1] The album was released in Asia on 23 March 2012, and in Europe and US on 8 October 2012.

The band consists of New Zealanders Shelton Woolright, Paul Matthews, Andrew Kerr and Brit Ed Martin. Drummer Shelton Woolright is formerly from critically acclaimed triple platinum selling band Blindspott (EMI), the only rock band in New Zealand music history to have both their debut and follow up albums enter the charts at number 1.

Bassist Paul Matthews' credits include double platinum selling band Tadpole (EMI/Antenna), and more recently Stylus. Matthews is also a producer/engineer and has worked on several gold and platinum selling albums, and top 10 singles. Together with Woolright they co-produced Six60's Single Rise Up 2.0 which has now gone 2x platinum. Ed Martin was the singer in UK band Volume and has worked as a vocalist with the likes of The Artful Dodger, Bruno Ellingham (engineer for KT Tunstall, Elbow and New Order) and Mark Hill.

The band have had tracks featured on many extreme sports DVDs including Quiksilver Euroforce Surfing Videos, Mormail Brazilian surfing label's DVD through South America and America, White Lines magazine in Europe, and 2009 film Cloud 9 (the Kelly Slater story). The band is sponsored by Gibson Guitars.

I Am Giant are a band that wants to be huge. Churning out tracks at a rapid rate, and constantly on tour, I Am Giant have performed at a number of venues and festivals around the world. Originally, their music has been popular due to differences in the the band members preferred styles in music. Unlike the bassist and drummer, who tend to follow more rock and alternative, Ed - the current vocalist - prefers more soulful music, such as Motown. This provides a unique sound, compared to other vocalists in the genre, that would be harsher.

The aspect that I love in my music, is energy. I Am Giant have a huge amount of it, as can be shown by their constant touring since the band's inception. Their City Limits EP remains my favourite of their releases, with the songs having an innocence, and vibrance to it. Their later releases have lost a little of their energy, and are darker in melody and messages, which helps them to gain time on the radiowaves overseas. When you watch them play, you can see how they have changed from a band that churns out singles, to a group that writes music that represents a journey; the songs link from one to the other in an onstage adventure.

The band are in tune with their fans, and will often meet before and after gigs with their "army". Their consistent attention to their fans has helped them maintain an ever-growing fanbase. Their music styles wildly change from one song to the next, but it all has that I Am Giant feel to it, which makes it instantly recognisable.