« The Caretaker of Imagination review 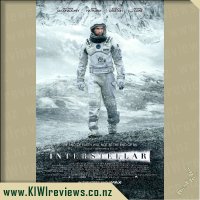 In Earth's future, a global crop blight and second Dust Bowl are slowly rendering the planet uninhabitable. Professor Brand (Michael Caine), a brilliant NASA physicist, is working on plans to save mankind by transporting Earth's population to a new home via a wormhole. But first, Brand must send former NASA pilot Cooper (Matthew McConaughey) and a team of researchers through the wormhole and across the galaxy to find out which of three planets could be mankind's new home.

Visually this movie is spectacular. The shots of Saturn as they approached it, seeing the rings was amazing. Going through the black hole or the possiblilities of what the new worlds could look like, could not be faulted. I could watch the scenes of earth as the space shuttle ventured further in to the black mass for hours as it just looks so magical. You can tell then that a lot of money had been spent on this movie and if that was not enough the casting would definitely back up that point Caine, Hathaway, McConaughey, Lithgow and Damon to name a few. All of this added up to what could of been a fantastic movie had it not been for the confusing script.

Okay I am no Einstein and times I have to admit I was getting lost and confused but then something would happen and I would be back on track and could keep up with it. That is until the ending I am either so dumb or this movie is extremely weird and does not make sense.

Basically, the world is coming to his last days and people are starving as the crops are being attacked by the blight. So Nasa with the help of 'something' have located a worm hole which has opened up the possibility of new 'homes' for us all. That is the easy part, no confusion there pretty straight forward. Right, so the crew check out a planet where its time is relatively for one hour on this planet its 7 years on earth. Really neat concept. Not giving anything away the planet does not work out.

On to the second planet Matt Damons home, also pretty spectacular but something happens and the fuel is running out. Anne goes on to the third planet where Matthew decideds to go home to his family. (trying not to give to much away.) This is where I am extremely lost. I have no idea why he did what he did and what actually occurs right then and how the whole 3 deminsion vrs 5 deminsion works or how the time factor takes place. Extremely confusing unless you understand time and gravity and space.

I enjoyed aspects of this movie but I can not say I would be in a hurry to watch again. Matthew to me has a tendancy to mumble and I find when he goes off on one of his tangents he mumbles and I have no idea what he is talking about half the time. Anne even done it a couple of time. I found three hours to be a long time to watch a movie and then not understand what you are actually watching. Feel like I wasted 2 hours of my life minus the beautiful scenery of course. Interstellar is classified as an epic film, categorised by its use of large scale, sweeping scope and spectacle; much like other epic films as '2001: A Space Odyssey', and 'Star Wars'. While large in scale, with a lot of potential plot lines, I found the film to be very restricted with respects to the variety and quantity of cast.

The film starts off in a rather confusing manner, combining the "perfect movie spectacular" style with "documentary" style excerpts, supposedly as a method of conveying back-story for the film. It is very much a fleeting glimpse of the story, and most of the history remains a mystery until far into the movie. While it did give a more authentic feel to the film, it still left me unsure as to what was going on for most of it, preventing me from being fully engaged in the film.

It quickly accelerates to a point in the film, where everything you have figured out is made redundant, and you are thrown into another part of the story with limited intel, and and even more limited cast. As someone that enjoys and has studied the sciences, I was slightly annoyed at how little the storyline made sense to me. If it was fully Sci-Fi, then I could blow it off as being unrealistic and just enjoy it. But 'Interstellar' is framed like a sequel to 'Apollo 13'; like a scientifically accurate documentary, and that image of "scientific accuracy" is disconcerting.

The use of the term "gravity" is also varied throughout the film, which again makes me think too much about the logic of the film, and leaves me less time actually enjoying the plot otherwise. These factors led me to start losing interest as the film went on, as I understood less and less of what was going on, and I found myself having to rewatch parts as I zoned out.

I did enjoy the general quality of the film, and the graphics and special effects were great. The portions of the film when the protagonists were exploring new worlds, was indeed interesting, but it was a portion that was under-utilised and ultimately was too short to keep my interest. But this wasn't enough to make me really enjoy the film. It was overshadowed by the "science" that made you question everything, instead of accepting it, and enjoying the plot. And at almost 3 hours in length, it is quite a long time to question what you are watching.