ProdID: 7501 - Get Out
Directed by Jordan Peele 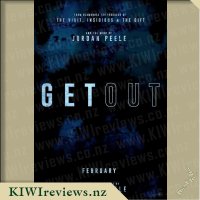 Disclosure StatementFULL DISCLOSURE: A number of units of this product have, at some time, been supplied to KIWIreviews by the company for the purposes of unbiased, independent reviews. No fee was accepted by KIWIreviews or the reviewers themselves - these are genuine, unpaid consumer reviews.
Available:
on DVD & BluRay from August 2017

Get Out product reviews

Now that Chris (Daniel Kaluuya) and his girlfriend, Rose (Allison Williams), have reached the meet-the-parents milestone of dating, she invites him for a weekend getaway upstate with Missy and Dean. At first, Chris reads the family's overly accommodating behavior as nervous attempts to deal with their daughter's interracial relationship, but as the weekend progresses, a series of increasingly disturbing discoveries lead him to a truth that he never could have imagined. I love thrillers that get my heart rate going so I was looking forward to watching Get Out. My hubby absolutely hates scary movies so I loaded up the laptop, put the headphones on and settled down to watch.

Get Out is told from the perspective of Chris, an African American who is meeting his girlfriend Rose's parents for the first time. Most of the movie is set at her parents' house and although Chris is obviously worried about the interracial relationship, her parents seem unfazed and very welcoming. Straight away Chris notices weird behavioural traits in the African American staff and lots of awkward conversations with guests lead him to think it's due to racial differences.

There is some light relief in the form of Rod (LilRel Howery) a TSA Agent and Chris's best friend. He doesn't believe that Chris should be dating a white girl and thinks this family visit is a bad idea. The scenes with Rod are sometimes hilarious and provide a break from the tension that is building.

Half way through the film you start to see where the movie is heading but there are still plenty of twists and turns to surprise. Get Out is not really a horror movie and not really a comedy but an entertaining and suspenseful thriller. The movie is genuinely creepy and a lot of that is down to the great casting. Daniel Kaluuya (Chris) and Allison Williams (Rose) play their roles perfectly and come across as real and likeable characters. The musical score and the use of inspired camera angles from Chris's perspective also create a unique and suspenseful movie.

I really enjoyed this movie and there were some moments I literally jumped out of my seat! It is the sort of movie that would get a cult following and is worth a watch!

This is one of the more peculiar films I have watched recently. With screenplay written and directed by half of the American sketch comedy duo Key & Peele, we are given a different perspective on the thriller. Combining shock treatment, with humour and racial drama, 'Get Out' is well balanced, and a refreshing change to the usual formulaic content Hollywood churns out on a regular basis.

The film follows an interracial couple; Chris, a black man (Daniel Kaluuya) who is dating Rose, a white woman (Allison Williams). The entire plot follows their trip to visit Rose's parents, which immediately sets the tone with Chris' apparent uneasiness, and his question, of "Have you told them?". Much of the film provides some much needed social commentary on the awkwardness of many "forced" interracial interactions, where the majority feels a need to include the minority and impress them by name dropping celebrity minority names etc.

But as a this is a thriller, the film takes a dark turn. Beginning sweet and happy, it swiftly becomes awkward and uneasy, at which point it escalates quickly towards an ending that is downright over-the-top and cultish. There are many shock scares, and this is generally achieved with brilliant camera work, the use of the musical score, and the mannerisms used by the actors; it is amazing how slightly different behaviour can easily lead to uneasiness.

The most surprising aspect of this film however, came down to the use of comedy. Lil Rel Howery's role as Chris' friend and TSA Agent, is a welcome connection to the outside world, where the silliness of the plot is effectively mocked for the preposterous nonsense that it is. It allows the audience welcome breaks from the constant relenting tension that we feel in the main arc, but is also integral to the major storyline, as nearly every classic horror could be resolved with a car or mobile phone.

Casting-wise, I loved the casting choice of Allison Williams. She came across as genuine in her characters intentions and even when I thought I was losing my ability to empathise with her character she brought he back in, and got me in the edge of my seat. Daniel Kaluuya did well, and was enjoyable to watch, but the rest of the cast could have done better if their eccentricities were a little less pronounced, where their actions were the focal point, rather than being able to draw conclusions from their outward appearance and mannerisms.

The film has many a plot hole, and the more that I think about it, the more questions that are raised. And the reveal of specific plot elements lack subtlety, to the point that you can predict much of how the film will progress. But the attitude with which it does so, and the timing, allows the audience to still revel in the comedy, the scares, and the self reflections within the social commentary.

A film that was brilliant, and yet horrible at the same time. Something you truly have to experience yourself to be able to understand.