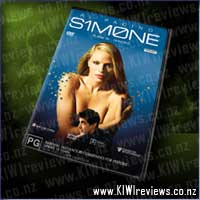 Director Victor Taransky (Al Pacino) has just blown his last film. After a falling out with his demanding, temperamental lead actress, Taransky is facing the end of his career. That is, until he discovers S1mOne, a Hollywood star in the making.

Beautiful, talented, without ego and totally committed to Taransky, S1mOne is a director's dream. From her very first movie, S1mOne captures the hearts of both critics and audiences alike. Almost instantly she is a worldwide star and Taransky is back as Hollywood's No. 1 director. Her success is so unprecedented, it seems too good to be true. Exactly.

From the writer of "The Truman Show" come a delicious satire about a star who is totally manufactured - this time by a computer. Starring Al Pacino (Insomnia), Catherine Keener (Being John Malkovich) and Jay Mohr (Jerry Maguire), this is a wry and wicked comedy about a unique Hollywood star - no ego, no outrageous demands, no tantrums, no hang-ups and no shrink!

S1m0ne was an interesting concept - what if actors could be completely replaced by a computer program? The lengths Victor Taransky must go to in order to hide Simone's true nature from the media (where she has become an instant star) grow steadily from the amusing to the ridiculous. By the time Taransky is arrested for the murder of a woman who never existed, I am both laughing and wondering how on earth he is going to get out of this mess. Parts of this film remind me of 'Wag the Dog' (with Dustin Hoffman and Robert De Niro) - lies upon lies, compounding and twisting to try and cover the previous ones until everything spins out of control.

Definitely an interesting film to watch, though not really one I would look at repeatedly.

A family whose suburban home is haunted by evil forces must come together to rescue their youngest daughter after the apparitions take her captive.